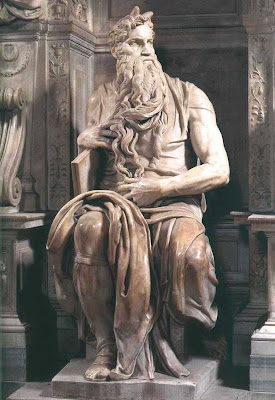 When confronted with this impressive statue of Moses in Rome’s Church of San Pietro in Vincoli, one cannot help but be awestruck. It was created between 1513 and 1516 by Michelangelo Buonarotti as part of a gigantic freestanding tomb for Pope Julius II and destined for the famous St Peter’s Basilica, where the Pope was to be buried. After Julius’ death in 1513 though, plans for the tomb were first postponed and subsequently the subject of endless quarrels. The resulting monument was a source of tremendous grief and frustration to Michelangelo: it was only a fraction of the intended size, and finished 32 years after the Pope’s demise. Moreover, it wasn’t and would never be a tomb, but rather just a cenotaph, as Julius’s body was buried in St Peter’s Basilica.
The statue of Moses was one of the few remaining elements that were executed according to the original design. Michelangelo (1475-1564) regarded it as one of his most lifelike creations. The fierce eyes of the Old Testament prophet, his swollen muscles and bulging veins, are indeed very realistic, almost scarily so.
Something else catches our attention: why on earth would Michelangelo choose to endow Moses with two horns? The explanation for this can be found in a translation error. In those days, the most commonly used translation of the Bible was the Latin Vulgate. Today, Exodus 34:29 reads: ‘When Moses came down from Mount Sinai with the two tablets of the covenant law in his hands, he was not aware that his face was radiant because he had spoken with the LORD.’ The Hebrew word ‘qeren’ in the original text has two meanings, ‘radiant’ or ‘with horns.’ In the Vulgate, this part of the passage was translated as ‘cornuta esset facies sua’ (‘that his face was horned’). For centuries, Moses was depicted with horns on his head as a result of this mistake. While Michelangelo’s statue isn’t the only example of this phenomenon, it certainly is the most famous one.
(text: Maarten Levendig)
Geplaatst door Maarten Levendig op 4:16 AM 1 comment: 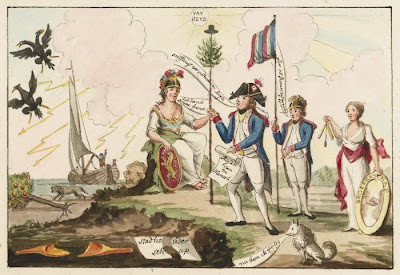 PATRIOTS AND ORANGISTS: THE CHANGING FACES OF LIBERTY
State art is propaganda. Important artists glorified ruling powers, while popular opinion hardly survived until freed by printing. After the French Revolution (1789) let crowned heads roll, republican ideals flooded Europe. The Netherlands were already a Republic since 1581, but dealt with political and military influence from the ‘stadtholder’ or governor, an elected post exclusively held by the ever monarchy-eager House of Orange. French-fuelled unrest between Prussian and British-backed Orangists and enlightened ‘Patriot’ opposition finally caused the infamous flight of last stadtholder William V (1748-1806) to England.
This anonymous 1795 cartoon puts a Patriot spin on the event. It mocks William, sadly waving goodbye from a fishing-boat. Meanwhile, lightning drives Prussian eagles from the skies, an orange-tree is uprooted and an English bulldog is on the run. A broken yoke and a torn paper saying ‘stadtholdership’ lie in the foreground, flanked by a ‘now safe’ Patriot ‘keeshond’ dog. The seated Dutch Virgin thanks a ‘brave Frenchman’ for restoring her ‘deprived human rights’. Their hands meet holding a liberty tree, while another Frenchman promises safety under his banner. The woman on the right holds a plummet and a shield, symbolizing equality and fraternity.
French fraternity forced the Netherlands into a client state, first as ‘Batavian Republic’, then as ‘Kingdom Holland’ under Napoleon Bonaparte’s brother Louis, before ultimately becoming a French province. Ironically, Louis’ kingship prepared the Dutch for monarchy, for after Napoleon’s defeat the allied victors restored conservative regimes through Europe. William V’s son became the first Orange King William I, remembered in history for losing half his kingdom to Belgian insurgents.
Crown prince William II was wounded fighting at Waterloo, a minor feat maximally exploited in Orangist propaganda painting. Today, royal weaponry is limited to scissors for cutting ribbons. But now ratings-driven media are king and whip their loyal subjects into flag-waving frenzy, peaking during next week’s inauguration of William’s great-great-great-great grandson as the Netherlands’ next monarch. Modern patriots seeking freedom from this tyrannical ‘display of infantile public coquetry’, as one critical columnist put it, had better go biking in the countryside.
(text: Jos Hanou)
Geplaatst door Maarten Levendig op 1:46 AM No comments: 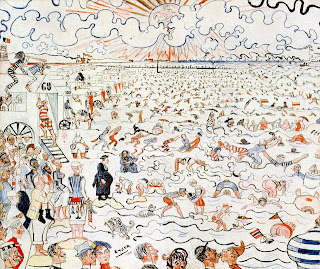 ENSOR’S BATHS AT OSTEND
That Vincent van Gogh was a prime innovator of modern art, a bridge between impressionism and expressionism, is undisputed. That the same can be said of the Flemish artist James Ensor is less established. Ensor himself was quite aware of his position, and stressed his role as major influence on the myriad of styles that erupted in the early twentieth century. His claims were acknowledged by the most important German expressionists, such as Kirchner, Grosz and Nolde.
Like many crucial innovators in art, Ensor diametrically opposed and questioned society and its values. Like Van Gogh, he felt frustrated by the general consensus on what constituted good art. And like him, he produced his best works in the years around 1890. But interestingly, Ensor, by any means the more radical of the two, creator of art that was certainly further removed from the general ideas of beauty than Van Gogh's, did not suffer the bitter rejection the Dutchman endured. In fact, as time passed, Ensor's status as an artist’s artist grew considerably, he became a favourite of the Belgian king, and was made a count in 1929. Still, while over time Van Gogh's art became mainstream, Ensor's never did. Even today, people do not quite know what to make of the radical work he produced in the late 19th century.
Les Bains à Ostende is a key work in Ensor's oeuvre. It shows a bathing scene in Ostend, the fashionable bathing resort in which he lived nearly his entire life. Looking carefully at the way the frolicking in the surf is depicted, it becomes clear that Ensor is not at all charmed by these bathers. In deceptively simple, naïf and cheerful shapes and colours, Ensor paints a picture of infinite banality. Through telescope-like binoculars, seedy voyeurs shamelessly spy on a sea of creatures that exhibit vulgar behaviour: fornicating dogs, a man grabbing a woman's chest, a fat lady flaunting her naked behind, two clownish fools kissing, a floating obese figure – it goes on and on... a grotesque infinity that, in all its apparent cheerfulness, is strangely reminiscent of Hieronymus Bosch's depiction of hell.
(text: Edgar Foley)

VAN GOGH AND THE SPRING BLOSSOMS OF 1888
Flowering orchards are probably never depicted more beautifully than by Vincent van Gogh during his stay in Arles, southern France. Throughout this period, he was tormented by depressions and despair - ultimately leading to his tragic suicide in 1890 - but the blossoming fruit trees were a source of hope and comfort to him. Vincent was struck by the fact that even the most weathered, gnarled trees could produce the most delicate of flowers; a symbol of renewal.
Van Gogh had ended up in Arles after many wanderings. Pivotal for his artistic development was his move to Paris, where he immersed himself in the latest trends in fine art. He shared an apartment with his brother Theo, who was an art dealer. Partly because of his poor health and the difficult relationship with his brother, Vincent decided to move to the south of France in 1888, to follow the sun and find favorable surroundings for his painting.
In Arles, Vincent worked like a man possessed, producing more than 200 paintings in less than 15 months. But, while today his paintings are among the most sought after of all times, Theo managed to sell just one of Vincent’s canvases. The only person ever to buy a work during his life was the Belgian impressionist painter Anna Boch.
Van Gogh made Pink Peach Tree in Blossom (Reminiscence of Mauve) in March of 1888, shortly after his arrival in Arles. The subtitle refers to Anton Mauve, a renowned Dutch painter who had taught and encouraged Vincent in earlier days. Vincent wrote to Theo: ‘I have been working on a size 20 canvas in the open air in an orchard, lilac ploughland, a reed fence, two pink peach trees against a sky of glorious blue and white. Probably the best landscape I have done. I had just brought it home when I received from our sister a Dutch notice in memory of Anton Mauve [..] Something - I don't know what - took hold of me and brought a lump to my throat, and I wrote on my picture: Souvenir de Mauve.’
(text: Maarten Levendig and Pauline Dorhout) 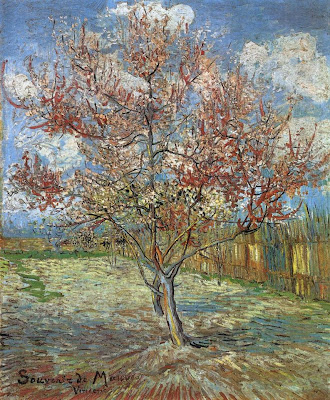