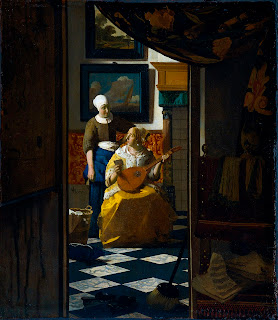 This vista into a Dutch interior, offered to us by the Delft painter Johannes Vermeer, reveals an intimate domestic scene: a lady is holding a letter she has most likely just received from her housemaid. She looks up at the maid, whose body language suggests that she has more than just an inkling about its contents.
Vermeer gives us some clues about the nature of the letter as well. First, the special point of view (through the doorway, with the curtain pulled aside) turns us viewers into voyeurs, and makes us witnesses to a delicate situation we should perhaps not know about. Second, the room is filled with objects that traditionally refer to love matters, either with a positive meaning (sheet music, lute) or something less decent (broom, slippers, or again the lute!). Vermeer’s contemporaries recognized such symbols, which were explained in emblem books that contained pictures, each accompanied by a motto or a verse to clarify their meaning.
An extra dimension is added by the paintings on the wall. In Dutch interior scenes, ‘paintings within paintings’ often have substantive significance. In The Love Letter (1669), the pictures in the background represent the love theme in a subtle way. The upper picture shows someone wandering along a path – symbolizing an uncertain future. The seascape underneath, showing a ship at full sea, might refer to a distant lover of the lady, far away at sea (not uncommon in that period of the Dutch Republic), but it’s more likely that the boat on a turbulent sea symbolizes an ardent lover.
Geplaatst door Maarten Levendig op 1:37 AM No comments: 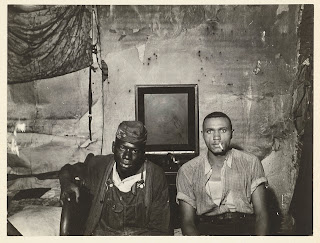 During the 1930s in the United States, the Roosevelt administration sent out a number of photographers to record the dire situation of people who were hit hard by the Depression. The photographs were meant to invoke sympathy for and solidarity with the victims, but also to gain support for the government’s New Deal programs to fight poverty and unemployment. Some of these images have become icons in American history, like Dorothea Lange’s Migrant Mother.
The Danish American Peter Sekaer (1901-1950) is one of these lesser-known among these photographers. He admired the work of his fellow-countryman Jacob Riis, who raised awareness by photographing life in the slums of New York City during the late 1800s. Sekaer was very socially engaged, which is reflected in his pictures.
This photograph of two men in Nashville, Tennessee is probably part of a series Sekaer did for the United States Housing Authority, which was concerned with slum clearance and public housing projects. Living conditions were indeed hard for these men: the room shown in this photograph is completely bare, apart from a phonograph visible behind the two men. Music must have played an essential part in their lives, perhaps offering a temporary escape from their daily sorrows.
The image is part of the Rijksmuseum’s twentieth-century photography exhibition, on display until February 14, 2011.
Geplaatst door Maarten Levendig op 1:38 AM No comments: 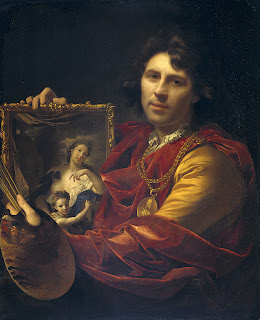 How relative fame sometimes can be, is shown by the story of Adriaen van der Werff (1659 –1722), a Rotterdam-based artist who gained great success with his fine paintings, for the most part biblical and (erotic) mythological scenes. Stylistically, he was a typical transitional figure between the ‘Golden’ seventeenth and eighteenth century, applying the techniques from Dutch baroque in a more classical, elegant manner.
Van der Werff was praised for his fabulous technique and his ‘noble’, elevated style, not only by his compatriots, who generally regarded him the as the best contemporary painter in the country, but throughout Europe. His work was collected by rulers such as Louis XVI of France and Frederick the Great, who even bought twenty of his paintings. Johann Wilhelm, Elector Palatine of Düsseldorf, appreciated Van der Werff’s skills so much that he appointed him court painter and later even knighted him. For one of his more important commissions, Friedrich Wilhelm awarded Van der Werff with a gold chain and medal.
It is that jewel that we recognize in this handsome self-portrait from the year 1699, painted at the very end of the seventeenth century. Van der Werff shows himself as a family man, holding a picture of his wife and daughter, but also as a worthy and confident artist. Back then, he could impossibly know that his reputation would fade so enormously. After gradually losing his popularity in the decades after his death, Van der Werff fell out of grace altogether: museums and art historians in the nineteenth century blamed him for ‘betraying’ the Dutch realistic tradition, then (and today not so much less) considered the only ‘true Art’.
Geplaatst door Maarten Levendig op 1:03 AM No comments: 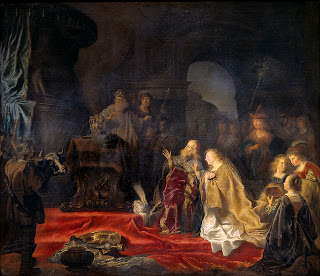 This week, for a change, a contribution from art historian Jos Hanou:

This painting, King Solomon’s idolatry, shows a scene from 1 Kings 11:1-13. Solomon’s ‘many strange wives’ tempted the old – here not so wise – king into worshipping their pagan gods with incense and sacrifices. Obviously, this did not sit well with the powers that be: ‘the LORD was angry with Solomon, because his heart was turned from the LORD God of Israel’. God’s punishment was merciless: Solomon’s kingdom would be split and given away.
Idolatry scenes were a popular subject in Dutch 17th century history painting. In this 1644 canvas, Salomon Koninck (literally: Solomon King!) shows some typical accessories of idolatry scenes: a priest with a censer, a servant holding a sacrificial bull and a slave holding a sunshade. Koninck’s style is Rembrandtesque, with the kneeling king and his lady highlighted by an invisible source of light. While they worship the pagan god of the furnace, the periphery fills up with more wives.
The ridicule of idolatry such as Solomon’s underscored the political and religious justification of the (Protestant) Dutch Revolt against (Catholic) Spanish rule. The controversy between Protestants and Catholics on religious imagery was an important trigger of the 80 Years War between the two countries. But the story also admonished socially. Moralist writers warned their readers against the temptations of religiously suspect immigrant maidservants, looking for work in rich Dutch households. This was in line with the 1637 Dutch Authorized Bible version, which commented on Solomon’s foreign wives as ‘lower in stature than a housewife’.
Geplaatst door Maarten Levendig op 1:43 AM No comments: