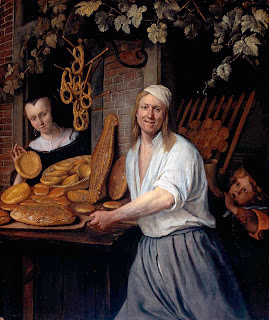 Most people who are involved in art know how important it is to study the back of a painting as well as its front. It often discloses valuable information regarding the identity of the artist, the subject of the painting, its place of origin, provenance and many other details.
The reverse side of this Jan Steen painting reveals the identity of the people in the picture. An elaborated text written down on the back tells us that they are Arend Oostwaert and his wife Catharina Keyzerswaert. Furthermore, the inscriptions report that the picture was painted ‘over 79 years ago’ and the exact location in Leiden where the couple ran their baker’s shop. As the inscription itself is dated 1738, Steen must have portrayed them around 1658, which is a year after Oostwaert and Keyserswaert got married. It is likely that this extraordinary portrait was painted for that occasion by their fellow-townsman Steen. It may have even been his wedding present, as this type of painting would have been too costly for common people.
Another interesting detail of the inscription is the explicit note that the little boy is not Oostwaert and his wife’s child, but Jan Steen’s then seven-year-old son Thaddeus. He blows the horn, a standard baker’s accessory which was used to let the public know that freshly baked bread was ready for sale. Steen added a subtle allusion: he arranged the small rolls in such a way that they seem to come out of the horn, thus evoking the classic motive of the Cornucopia, horn of plenty.
Geplaatst door Maarten Levendig op 3:54 AM 3 comments:

Pieter Jansz. Saenredam: Interior of the Church of St Odulphus at Assendelft (1649) 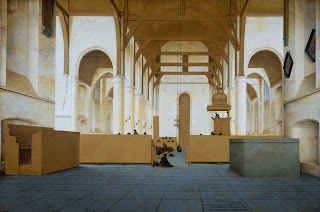 In the overcrowded art market of the seventeenth-century Dutch Republic, artists tended to specialize in certain genres or subjects. Among them, Pieter van Saenredam was the unmistakable specialist in the field of church interiors. In fact, Saenredam (1597-1665) was the first to develop this theme into a genre. Not that architectural paintings of churches didn’t exist, but they were either a product of imagination, or they merely served as a background.
Saenredam was mainly interested in the building itself and avoided to show too many details in his paintings. His austere approach fits in with the fact that ever since the Protestant belief had become the state religion, churches in the Netherlands were stripped of all their decorations, which were considered to be improper.
To depict the churches as accurately as possible, Saenredam made use of an almost mathematical working method. He started with drawing guidelines on paper, all leading to one vanishing point, and used this as a grid for a drawing of the whole interior in its correct perspective. He also made sketches and measurements of individual components, such as pillars or windows. After all these preparations, he minutely transferred his drawings onto the panel. Saenredam is one of the few artists of his time that strove for such an exact representation, providing the viewer with a miraculous sense of the space inside the church.
The building depicted here is the St. Odulphus in Assendelft in 1649. This painting must have had special significance for Saenredam, as Assendelft was his hometown. On one of the floor tiles in the foreground one reads the name of Iohannis Saenredam, Pieter’s father, who was buried there in 1607. 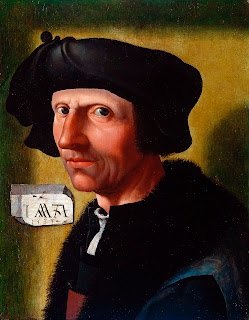 Before the year 1600, self-portraits were a pretty rare phenomenon in the art scene of the Northern Netherlands. While self-portraits would become a much sought-after commodity for art lovers in later centuries, only a few have survived from this early period.
This is an example of those earlier ones, a portrait that the Amsterdam pain...ter Jacob Cornelisz. Van Oostsanen (ca. 1470-1533) made of himself. The twisted position of the man and his turned eyes are typical of those who watch themselves in a mirror. The trompe l’oeil note, left on the painting, shows an I and A (for Iacobus Amstelodamensis, Jacob of Amsterdam) with a house mark, along with the year 1533.
It is known that by October of that same year he had died, and there is some controversy on whether the painting was perhaps made earlier and only the note added to it in 1533, especially since the style resembles his earlier work (1520s).
What is certain is that his son Dirck Jacobsz later used the self-portrait in a rather curious anachronistic tribute to his parents: it shows his father, looking like he did in the 1530s (or 1520s), painting his mother who looked like she did around 1550. The latter painting is owned by the Toledo Museum of Art in Ohio.
Geplaatst door Maarten Levendig op 1:04 AM No comments: 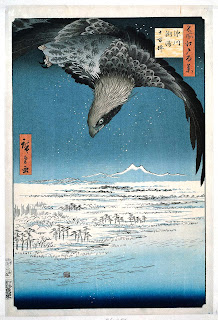 One of Vincent van Gogh’s main influences, besides artists such as Delacroix and Millet, was Japanese art. Van Gogh adored the prints of Japanese artists and he often used them as a source of inspiration, especially for his landscape paintings. What he loved about them were their original, inventive compositions and bright colors.
Vincent’s favorite Japanese painter was Utagawa Hiroshige, of whom he possessed several works. He painted exact copies after them, some of which are now on display in the Van Gogh Museum in Amsterdam. Hiroshige (1797–1858) was one of the last representatives of the so-called Ukiyo-e, a Japanese genre of paintings, woodblock prints and woodcuts, produced between 1620 and 1867. This woodcut by Hiroshige from the Rijksmuseum collection, depicting an eagle floating over a winter landscape of Fukagawa, is one of a cycle of views of (the area of) Edo, today's Tokyo. Characteristic of Hiroshige’s art are the beautiful colors and the uncommon point of view, inviting the spectator to look more precisely.
In the second part of the nineteenth century, Japanese art became fashionable among European artists. This trend, called ‘Japonisme’, was particularly strong in Paris, where the art dealer Siegfried Bing sold Japanese prints, paintings and artifacts in his gallery, Maison de l’Art Nouveau. Bing’s exotic merchandise heavily influenced the post-modernists (including Van Gogh, who lived in Paris at that time), as well as the young artists who began to work in a new style, which became known as Art Nouveau, named after Bing’s shop.
Geplaatst door Maarten Levendig op 1:13 AM No comments: