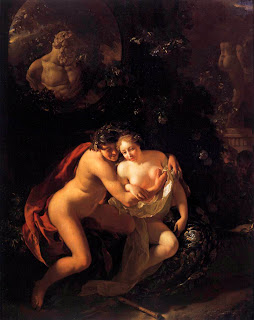 This somewhat cheeky image was painted by Adriaen van der Werff (1659 –1722). The style of this Dutch artist is considered to be a transition between the seventeenth-century Baroque and the more classical, elegant manner of the eighteenth century. Amorous Couple Spied upon by Children is a relatively early work, dating from 1694. Later in his career, when he had acquired fame as a ‘noble’ and elevated artist, Van der Werff disassociated himself from these frivolous, ‘immature’ paintings.
The panel depicts a, barely covered, young man and woman who seem oblivious to the presence of the children on the right, who are secretly spying on them from behind the bushes. A saucy detail is the glance the woman throws at the viewer, essentially turning us into voyeurs. Some other elements in the background, like the statues of the dancing satyr and Silenus - the always drunken companion of the god Dionysus – further emphasize the painting’s erotic character.
The sculptures also add to the classical atmosphere of the scene, as do the wreath on the head of the young man, the flute on the ground and the couple’s garments. They place the painting in the pastoral tradition, a genre celebrating the classical past in an idealized manner. One of its standard features is the Arcadian romance of amorous shepherds.
Van der Werff was widely praised for his fabulous skills, not just by his compatriots, but throughout Europe. His fine paintings, mostly biblical and (erotic) mythological scenes, were fanatically collected by rulers such as Louis XVI of France and Frederick the Great. Unfortunately, Van der Werff would posthumously fall out of grace, as museums and art historians in later centuries blamed him for ‘betraying’ the Dutch realistic tradition.
(text: Maarten Levendig and Pauline Dorhout)
Geplaatst door Maarten Levendig op 8:24 AM No comments: 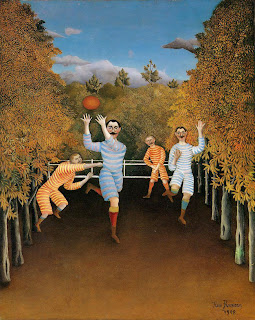 In my grandparents’ house used to hang a reproduction of this work by Henri Rousseau. As a child, I was completely fascinated by the painting and I could look at it for hours. I was touched by the ineffable combination of colors and shapes on the canvas, rather than the actual scene. Of course, I marveled at the footballer’s strange sport clothing and their extraordinary mustaches, but above all there was a magical atmosphere in the painting that wouldn’t let go of me. More than 35 years later, I'm still enchanted.
Rousseau (1844-1910) is commonly classified as a Naïve painter, because of his uncomplicated, 'childish' style. He was a late bloomer and only started to paint at the age of forty. He never had any formal education in the arts and earned his money as a toll collector, a profession that won him the nickname ‘Le Douanier’. Rousseau’s subjects vary widely, but he is best known for his depictions of jungle scenes, which is remarkable given the fact that he never set foot outside his native France.
Despite the fact that his work was rejected and ridiculed by most critics, Rousseau continued to believe in his own qualities and tried to exhibit as much as possible. And not entirely fruitless: after he received his first positive review in 1891 from the painter Felix Valloton, the appreciation of his work began to increase, albeit mainly from avant-garde artists like Picasso, Signac, Brancusi, and Apollinaire. Today, his ‘naïve’ art is considered to have had a huge influence on the emergence of modernism and as an indispensable source of inspiration for important innovators such as Beckmann, Kandinsky and Léger.
(text: Maarten Levendig)
Geplaatst door Maarten Levendig op 3:06 AM 1 comment: 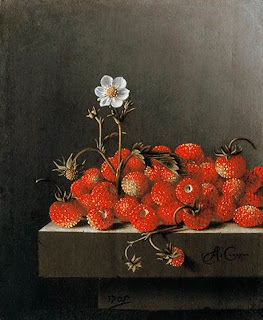 This unassuming, but utterly charming bunch of wild strawberries was made by Adriaen Coorte, a Dutch 17th century painter who lived in or near the city of Middelburg in Zeeland.
To most people nowadays, Middelburg is n

o more than a friendly provincial town. During the Dutch Golden Age, however, it was quite a different story! Middelburg was the second most important trading center of the country (Amsterdam being the first), with large shares in the Dutch East and West India Companies. Its prosperous citizens collected foreign artifacts and ordered luxury goods for their interior, and silversmiths, weavers and glassmakers had thriving businesses.
The overseas travels also sparked a growing interest in botany, and Middelburg doctors, preachers and merchants alike created luxurious gardens filled with newly imported exotic plants. In order to study such rare species outside their flowering and fruit-bearing periods, they were recorded in drawings and paintings to provide them with a permanent lease of life.
Flower and fruit still lifes became a hugely popular genre. For painters, they offered an opportunity to show their mastery of rendering different textures. For the owners, they formed a pleasant way of showing off wealth without compromising on religious virtue, since they celebrated God’s creations.
Toward the end of the 17th century, the arrangements became more and more ornate, resulting in elaborate displays of fruit, vegetables and tableware called “pronkstilleven.” While his contemporaries tried do outdo themselves, Coorte moved in the exact opposite direction: over the years, his works gained in simplicity, often showing just a single type of fruit. By reducing the composition of his backgrounds to bare ledges or niches, the focus on the main subject is intensified, revealing the extraordinary qualities of ordinary objects.
While his unfashionable austerity caused the painter’s name to sink into oblivion for centuries, it is precisely this plain design which prompted his reappraisal in recent years and which makes his work so timeless.
(text: Pauline Dorhout)
Geplaatst door Maarten Levendig op 2:59 AM No comments: