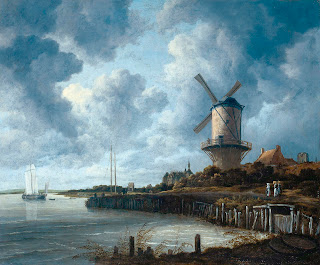 This work by Jacob van Ruysdael depicts a typical Dutch landscape: a high, cloudy sky over a flat landscape, with lots of water and a prominent role for a characteristic windmill. Although the artist afforded himself some freedom in his portrayal of the scenery, Ruysdael’s painting offered a reasonably accurate impression of the landscape near Wijk bij Duurstede, a city in the central region of the Netherlands.
One element in the picture has led to a dispute among art historians: there seems to be something strange going on with the weather. The gloomy sky and the heavy clouds indicate severe weather, but the position of the mill’s arms and the slack sails of the boat suggest that there is not much wind. While some believe that the painting is simply unrealistic, others believe that Ruysdael just showed the precise moment before the storm will break out in full force.
The Haarlem-born Ruisdael, who lived between 1628 and 1682, was famous for his atmospheric impressions of nature, in which the elements seem to be involved in a dramatic battle with each other. Usually, people play a minor role in his expressive landscapes.
Many painters of the so-called Romantic Movement, like Caspar David Friedrich and William Turner, were inspired by Ruisdael’s work. Their admiration is understandable: in Ruisdael’s works, nature is not presented in a decorative way, but as an autonomous force. You could say he thus granted nature a personality, two centuries before this would grow into a fashionable artistic ideal.
(text: Maarten Gaillard)
Geplaatst door Maarten Levendig op 4:17 AM No comments:


While agreeing with photographers like Stieglitz on the idea that photography was indeed an art form rather than a hand maiden or visual aid to painters, Paul Strand disliked soft focus and other manipulations that were typical of the Pictorialist movement. Instead, he proposed what he called “straight photography.” Strand’s pure and direct style, with a keen eye for geometric patterns and perspective, took photography into its next phase: modernism.
While the aesthetic aspects of Strand’s images are so striking that they cannot escape our attention, Strand was convinced, like Jacob Riis and Lewis Hine before him, that photography could serve as a tool to initiate social change. He believed that maintaining a balance between the rational or objective on one side and the emotional on the other was essential in attaining such goals.
This 1915 picture of Wall Street is a perfect example of this balance. The unadorned building with its austere shapes takes up most of the space. With its repetition of lines and shapes, the image borders on the abstract. The giant rectangular holes do not reveal what goes on behind them; rather, it looks like the small figures could be swallowed up by them at any given moment. People are reduced to subordinate, indistinct puppets, their shadows nothing more than parallel lines in the overall pattern. In all, the image confronts us with the realization of how insignificant the individuals are in comparison to the huge J.P. Morgan Bank, a symbol of capitalism. Thus, while the first impression may be very factual, if we pause and ponder we can discover its implied personal message: a warning against greed and the power of money, and the loss of humanity that this may lead to.
(text: Pauline Dorhout)
Geplaatst door Maarten Levendig op 1:01 PM No comments: 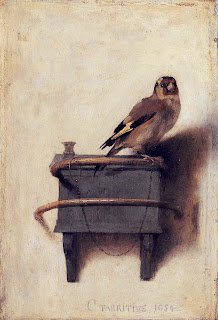 Rembrandt's most gifted pupil was supposedly Carel Fabritius. I have to use the word 'supposedly', as only fifteen of his delicate paintings are still with us. Fabritius died at only 32 years of age, due to a massive explosion of gunpowder in 1654, which destroyed a large part of his place of residence Delft. In this disaster, his studio also got severely damaged and most of his work was destroyed by fire.
That Fabritius was trained by Rembrandt is clearly visible in the typical brushwork, earth tones and golden highlights. But unlike most other of Rembrandt’s students, who remained faithful to the heavy chiaroscuro of their master, Fabritius went his own way. After he moved from Amsterdam, where Rembrandt ran his workshop, to Delft, he started to experiment with different ways of lighting. Instead of using great contrasts, he opted for a more even and also brighter illumination, thus creating a ‘golden glow’. Apart from his different handling of the light, Fabritius was also highly interested in complex spatial and illusionistic effects. It is widely accepted that such innovative elements, perfectly demonstrated in The Goldfinch, were of great influence on his younger colleagues from Delft, Johannes Vermeer and Pieter de Hooch.
The Goldfinch is a typical trompe l’oeil: when hung on a plastered wall similar to the one depicted in the painting, the deceived eye would presume the existence of a real goldfinch. Back then, gold finches were often held as house pets, chained and attached to a perch. The perspective reveals that the panel was meant to hang high, possibly in a niche. One theory goes that Fabritius’ charming painting was not meant to embellish an interior, but served as a house sign for a wealthy family called De Putter, the Dutch designation for goldfinch. They would welcome their visitors with this appropriate illusionistic surprise.
(text Maarten Levendig)
Geplaatst door Maarten Levendig op 3:00 AM 1 comment: 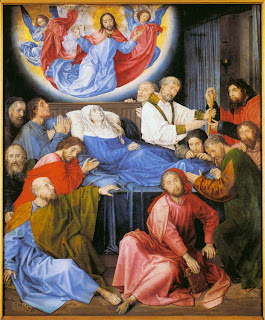 Three painters truly stand out among the Flemish Primitives: Jan van Eyck, Rogier van der Weyden and Hugo van der Goes. They were the greatest painter of the Low Countries, each in their own time; van der Goes being the last. Therefore it is fitting to devote this third and final instalment of my Flemish Primitives trilogy to him.
While van Eyck revolutionized painting and van der Weyden heralded modern art, van der Goes was the first to display overbearing emotion, chiaroscuro and highly complex pictorial compositions, thus being a precursor of the Baroque. These elements – save for the chiaroscuro, which is much stronger in his Monforte altarpiece – can most clearly be seen in his The Death of the Virgin (1470-1471).
In this work Mary is depicted at the exact moment of her death. She is surrounded by the apostles, who have gathered from all over the world. Above her head heaven opens and Christ, surrounded by scores of angels, spreads his arms in order to receive her. With this gesture he also shows the wounds in his hands, which indicate the triumph over death. Nevertheless the apostles are all mourning intensely. The way they are shown, each one of them displaying a different form of sorrow, all drawn back into their own individual grieve, was a novelty.
Also notable are the strange, unnatural colours. The painting radiates eerie blue and yellow. The curtain on the background is unnatural too: its foreshortening is purposely distorted. The whole effect of these elements is slightly disturbing; nearly sickening.
It is very probable that van der Goes displayed his own inner turmoil in this painting. He was known to lead an extravagant lifestyle, surrounding himself with the rich and famous, including emperor Maximilian of Austria. He also suffered severe depressions and it is recorded that he once had to be prevented from committing suicide. At the height of his fame he suddenly retreated to a monastery. So, van der Goes can also be seen as the first in a line of troubled geniuses, such as Caravaggio, Goya and van Gogh.
(text: Edgar Foley)
Geplaatst door Maarten Levendig op 5:33 AM No comments: 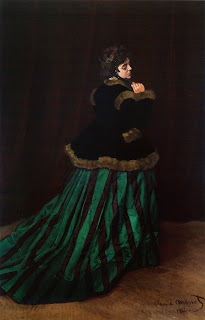 OOPS! – EPISODE 2: MONET AND MANET
A mild jury of the 1865 Salon - the annual exhibition of the Parisian Académie des Beaux-Arts – accepted paintings by both Edouard Manet (Olympia and a religious work) and Claude Monet. Manet’s unacademic style had been rejected by previous juries or ridiculed by critics; even colleagues found it ‘fit for nothing but the decoration of a lunatic asylum’. The ambitious Monet, at 24 Manet’s junior by 9 years, made his debut with two seascapes and later reminisced that ‘they were given pride of place, hung high-up in good view. It was a great success’. But Manet was puzzled when on opening day visitors congratulated him on his ‘superb seascapes’. After discovering his name was confused with a newcomer’s, he indignantly wondered ‘who is this Monet, whose name sounds just like mine and who takes advantage of my notoriety?’
The incident repeated itself in 1866. Salon visitors welcomed Manet with handshakes, 'bravos' and congratulations: ‘Excellent, my friend, your picture!’ But a frustrated Manet soon found the praised canvas to be a portrait of Monet’s fiancée Camille, ‘The Woman in Green’. To aggravate things, while leaving he stumbled on some friends and Monet himself, whom he had never met. Ignoring Monet, Manet exclaimed: ‘Ah, my friends, it’s disgusting, I am furious! One is only complimenting me on a painting that is not even by me. One would think it’s a hoax.’
The confusion was understandable. Camille’s portrait resembled Manet’s style: broad planes, shallow space, bold black outlines. But Manet had been praised for a masterly touch which was not his: a heavy blow to his pride. His grudge lasted for some years, until the two became friends when meeting again in 1869. From then on, they gathered regularly in the café Guerbois with fellow artists like Cézanne, Degas, and Renoir to exchange ideas at the end of a working day. While the radical Manet kept struggling to become an accepted Salon painter, the Impressionists around Monet tried to persuade the older painter to join their independent exhibitions. In vain, though Manet’s later works like ‘A Bar at the Folies-Bergère’ are seen as Impressionist masterpieces.
(Text: Jos Hanou)
Geplaatst door Maarten Levendig op 6:36 AM No comments: