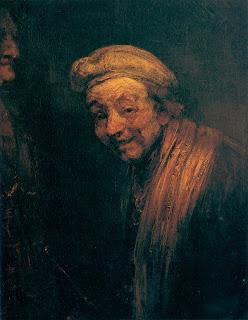 REMBRANDT’S LAST LAUGH
During his lifetime Rembrandt painted about 90 self-portraits. Psychoanalytically challenged art historians claim he did so as psychological research into his ‘self’. Self-reflection cannot be totally excluded, but reality is more down-to-earth. The art market especially required historical pieces and ‘tronies’ – heads expressing a particular emotion. By not using a model but himself, posing as a biblical or mythological person, Rembrandt saved time, money and addressed different art-buyers simultaneously. Moreover, famous masters painted themselves for collectors of celebrities’ heads, and most also kept self-portraits in their studio to show their skill to potential customers.
The ‘self-portrait as Zeuxis laughing’ is Rembrandt’s second last one, painted 6 years before his death. He does not hide his old age; thick layers of paint make the furrows on his brow and the heavy bags under his eyes literally touchable. But in spite of this rough and realistic style (a contemporary critic wrote ‘you can pick up a portrait by Rembrandt from the floor by its nose’), it differs from his other self-portraits. For once, the brush and maulstick in Rembrandt’s hands identify his profession. But why is he laughing, looking directly at the viewer? The image of the old woman in the shadows on the left gives the answer. It refers to a legend about the antique painter Zeuxis, who laughed himself to death after painting an old hag who ordered a portrait of herself as Aphrodite, goddess of love. No doubt this story appealed to the painter of real life, at a time in his career when buyers abandoned him in favour of a new, idealizing classicist style. By portraying himself as Zeuxis, who also often felt misunderstood by the public, Rembrandt ridicules a world that pretends to be better than it is. Rembrandt’s last laugh in this provocative painting is on the beholder: his ironic gaze challenges the old woman in all of us (but not you, of course).
(text: Jos Hanou)
Geplaatst door Maarten Levendig op 2:57 AM 1 comment: 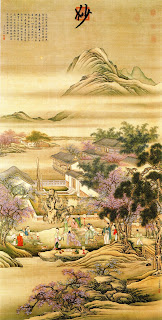 Leng Mei's painting Spring Evening Banquet at the Peach and Pear Blossom Garden (ca. 1700) provides a wonderful opportunity to explain a great deal about Chinese art. Not only is this painting representative for a style of painting that comprises almost all earlier Chinese painting styles, it also deals with one of China's greatest poets: Li Bai.
Leng Mei, active as a painter from 1677 to 1742, specialized in figure painting and worked for the atelier of the Kangxi emperor. Spring Evening Banquet is much more than a figure painting though: it belongs to the Orthodox Style (typical of the 1700s). Its practitioners sought to create a synthesis of figure and landscape painting with the ‘Literati Style’ – which had emerged during the Yuan dynasty (1271-1368) - and focused on representing the painter's inner world. So the Orthodox style aimed for representing the inner and the outer world simultaneously.
The poet Li Bai, who lived some thousand years earlier, during the Tang Dynasty, is one of China's greatest poets. Li Bai was quite a character, a libertarian, who besides being an accomplished swordsman, philosopher and poet, was a great lover and advocate of booze. A substantial part of his poetry is dedicated to describing the delights of drinking.
This painting is a depiction of a Li Bai poem – written in the top left corner. We see the poet accompanied by a group of friends in a lush garden, surrounded by blossoming trees, with the mountains of Sichuan in the background. The friends are having a banquet. They are drinking and exchanging verses.
The final lines of the poem demonstrate just how well Leng Mei has succeeded in depicting the outer as well as the inner world:
The ambrosian banquet is served amid the flowers,
and the flight of the winged goblet makes us drunk under the moon.
Without fine poems how can our refined taste be satisfied?
If anyone fails to produce a poem,
let him be punished according to the rule of the Gold Valley Garden.
(text: Edgar Foley)
Geplaatst door Maarten Levendig op 9:35 AM No comments: 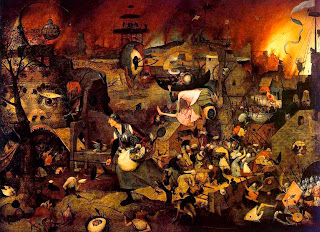 When the panel Dulle Griet by Pieter Bruegel the Elder in 1894 was presented at an auction sale in Cologne, no one was really interested. Yet, art collector Fritz Mayer intuitively decided to buy the panel at the auction anyway and took it to his Flemish hometown Antwerp. Since 1904, the public can enjoy it in the small, but very recommendable museum Mayer van den Bergh.
Bruegel was then commonly known as ‘Peasant Bruegel’, famous for his landscapes and what were assumed to be authentic representations of Flemish folk life. This spooky and chaotic painting, dating from 1561, did not fit that image. Essentially, in the 19th century, nobody understood its original significance anymore. Who was this mysterious, colossal woman that the painting earned its nickname from? ‘Dulle Griet’ (‘crazy girl’, often translated as ‘Mad Meg’) wears a military costume and seems to be heading for the mouth of hell, visible on the left. Her female followers loot the house on the other side of the bridge. Another giant figure, sitting on top of the building, carries a boat on his shoulder. And these are only a few elements of this picture, which is chock-full of monstrous creatures and enigmatic symbols that were probably easily understood by Bruegel’s contemporaries.
The present appreciation of Dulle Griet does not necessarily imply that one understands a lot more of this work, although many scholars have speculated about the significance since then. For example, the panel has been interpreted in the context of the warfare in sixteenth-century Flanders, Dante’s Inferno, Erasmian humanism, medieval allegory, gender studies and much more.
In my opinion, the safest interpretation is that Bruegel wants to show us an upside down world, in which all social and ethical standards that make civil society liveable are inverted. As such, it delivers an implicit warning: if we don’t behave in a proper way, i.e. without folly, greed and cruelty, our world ends in complete madness.
(text: Maarten Levendig, for close-ups see: wga.hu/html_m/b/bruegel/pieter_e/05/index.html)
Geplaatst door Maarten Levendig op 5:11 AM No comments:

The Alhambra (from the 9th century onwards); Granada, Spain 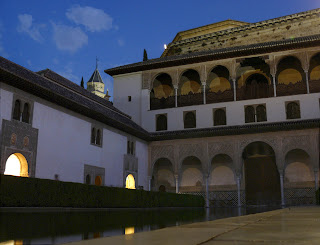 Under extreme pressure coal can become diamonds. This might be an appropriate analogy for how the Alhambra in Granada came into being. These days, this hilltop fortress with its palaces and gardens is one of Spain's prime tourist attractions; one of the most stunning sights in Europe. Its splendour seems a natural reflection of the mighty Kaliphate of Al-Andalus – but it isn't.
During the days Al-Andalus was the epicentre of the world, Granada was no more than an important provincial town. There was and had been a number of fortresses on the site of the current Alhambra since Roman times, erected from the red stones of the cliffs on which they stood – al-Hamra is Arabic for “the red one”.
After many centuries of internal strife and war with its Christian and Muslim neighbours, the Kaliphate of Al-Andalus had been crushed, and splintered into many small emirates. These emirates were subsequently conquered one after another by the Christian armies from the north, until eventually just one remained, tucked in the mountains of the extreme south of the peninsula: the emirate of Granada. Somehow, in defiance of overwhelming odds (constant wars with multiple enemies, crusades) this emirate managed to remain in existence for 254 years. It was founded by the master strategist Muhammed Ibn Nasr, and ruled by his predecessors, the Nasrids, until 1492. The Nasrids made Granada their capital and built their palace on the site of the old red fortress.
And somehow, though under constant threat, its economy crippled by war and tribute payments to neighbouring states, Granada became a thriving metropolis where the arts and the sciences flourished. Its palace became a citadel unrivalled by any other of its day. It was built in a style developed just for this one building, even with its own style of column. The extremely intricate interior design elaborates on and combines all the building styles that existed on the Spanish peninsula since the arrival of the Moors and thus the Alhambra became – unwittingly or not – a physical crescendo, a grand finale to an epoch in world history.
(text: Edgar Foley)
Geplaatst door Maarten Levendig op 5:31 AM 2 comments:

Paolo Veronese: The Feast in the House of Levi (1573); Gallerie dell'Accademia, Venice. 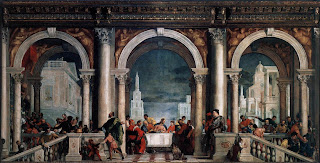 OOPS EPISODE 3 – GERMANS, DWARFS AND DOGS
In 1573 Paolo Veronese painted this enormous canvas (555 x 1280 cm) for the refectory of the Venetian Giovanni e Paolo monastery. Originally commissioned as a Last Supper - a standard subject for monastic dining-halls - it was to replace a work by Titian destroyed by fire.
The splendour of the painting probably stimulated prestigious, rather than pious appetites. Christ and his apostles are seated in the middle, surrounded by contemporary, extravagantly dressed people busily interacting inside grandiose Venetian architecture. But Veronese also included frivolities, like one apostle picking his teeth, a servant with a nosebleed and non-Gospel figures like a dog, midgets, a jester with a parrot, German mercenaries, drunks and other fantasies. Overall, it looks more like a Venetian patrician banquet than a sacred subject.
Understandably, this setting provoked grumbling about irreverence with religious hardliners. Even worse, the painting caused an investigation by the Inquisition, who accused the artist of heresy, then a capital sin. The tribunal records reveal why. Veronese had to explain why he painted ‘buffoons, drunken Germans, dwarfs and other such absurdities’, considering that ‘in Germany and other countries infested by heresy, it is habitual, by means of pictures full of absurdities, to ridicule the things of the Holy Catholic Church, in order to teach false doctrine to ignorant people who have no common sense’
The artist remorsefully argued that ‘we painters use the same license as poets and jesters, and I represented those halberdiers because it seemed proper to me that the rich and magnificent master of the house would have such servants.’ After promising to remove the Germans and to replace the dog by Mary Magdalen he was acquitted, but never touched the work again. Probably he or his principals felt that the power of the Inquisition was limited in Venice. Instead, he changed its name to a less doctrine-sensitive biblical episode: Christ in the House of Levi.
(text: Jos Hanou ; for close-ups see http://www.wga.hu/html_m/v/veronese/06/index.html)