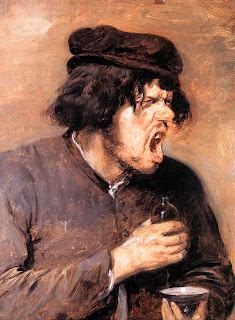 A somewhat crude-looking man has just swallowed a bitter medicine and his face expresses his disgust of it in all possible ways. The painting, which depicts the man’s physical reflexes quite convincingly, may be a representation of the sense of taste. Some parts of the canvas, especially the background, are painted rather roughly, but the facial features are rendered very precisely.
Its creator, Adriaen Brouwer (1605–1638), specialized in witty low-life scenes, mostly of drunken peasants, brawls and debauchery. Such scenes were popular among townspeople who would look with amusement at these uncivilized figures. Amongst his many admirers were both Rubens and Rembrandt, who had quite a few of his paintings in their personal collections.
There are many uncertainties about Brouwer’s life. For example, it is assumed, but not proven, that he was originally from Flanders. Furthermore, there is no concrete evidence for the current theory that he was a pupil of Frans Hals. It is not unlikely though, because we know that Brouwer was active as a painter in Hals’s residence Haarlem before settling for good in Antwerp in the early thirties. Brouwer's style also points in this direction: it combines the individuality and loose working method typical of Dutch artists like Hals with the Flemish interest in peasant scenes.
The lack of biographical data led to a stream of speculations about his personal life. A romantic image was created of a bohemian artist who drank and smoked all the time, painting in crowded pubs, amidst his subjects. Such assumptions arose from the well-known tendency to identify an artist with his work.
In the case of Adriaen Brouwer, we shall never be fully able to separate myth and reality. What’s left is a magnificent oeuvre, full of vibrant paintings that offer a glimpse into a raw world from centuries ago.
(text: Maarten Gaillard) 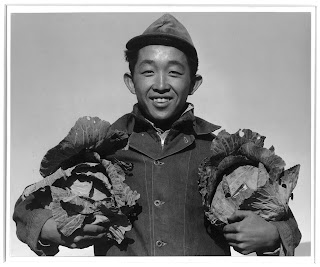 ANSEL ADAMS’S WAR PICTURES
Ansel Adams (1902-1984) is world-renowned for his excellent landscape photography, and his perfect tonality. But not many are familiar with his photographs of the Japanese American internment during World War II.
After the Japanese attack on Pearl Harbor in 1941, anti-Japanese sentiments in America were understandably strong. This, in turn, had a major effect on the lives of the members of the Japanese community in the United States. Within a few months, the government, fearing sabotage, issued a notice to all people of Japanese descent that they were to be evacuated from the Pacific Coast. This included not only first-generation Japanese, who had not been allowed to naturalize, but also their children, who were American by birth. In all, about two-thirds of the 110,000 people who were taken to relocation centers in remote areas of the US were American citizens.
Ansel Adams wanted to capture the resilience and good spirit of the Japanese Americans and to encourage Americans to accept them back into the community after the war. To this end, he published a book, Born Free and Equal. While this sounds commendable, he was a bit overzealous in stressing the positive. Many of Adams’s photographs show smiling faces, pretty gardens, beautiful mountains, and sports events. The man with his cabbages seems to have stepped right out of an advertisement.
In reality, conditions in the camps were far from ideal. When we compare his work to that of fellow photographers, it becomes clear what Adams doesn’t show: the armed guards, the barbed wire, and the primitive and squalid living conditions.
After their release from the camps, many Japanese Americans had to start from scratch, having lost all their possessions. Most were met with hostility. Their experiences were ignored for decades, and it wasn’t until 1993 that President Clinton sent an apology to the surviving former inhabitants of the relocation centers. In hindsight, a more balanced and honest picture than that which Adams presented might have helped raise awareness and sympathy among other Americans and soften their hearts sooner. Thus, ironically, his idealism may have attributed to the failure of achieving his goal.
(text: Pauline Dorhout)
Geplaatst door Maarten Levendig op 12:21 AM No comments: 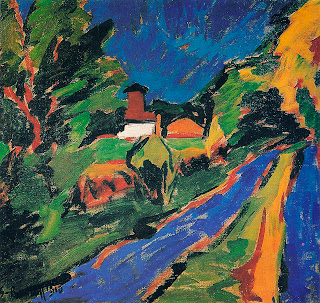 AN EXPRESSIONIST VILLAGE SCENE
This thrilling impression of the German village Dangast was painted in 1910 by Karl Schmidt-Rottluff (1884-1976). He was one of the founding members of a group of Dresden artists, along with Ernst Ludwig Kirchner and Erich Heckel, who named themselves Die Brücke (The Bridge). The Brücke artists believed that art needed to develop itself into a more ‘youthful’ direction. They opposed the older generation who, to their taste, only made ‘bourgeois’ art. Together with Der Blaue Reiter, a somewhat later group from Munich, they laid the foundations for a movement that would be called Expressionism.
The Expressionists strove for the ‘unspoiled natural,’ art freed from academic restrictions. Inspired by authors such as Nietzsche, Ibsen and Strindberg, and painters like Van Gogh and Gauguin, they wanted to convert reality into a ‘visual character.’ Unlike the Impressionists, their primary purpose was not pure perception, but a psychologization of the perceived impression.
This aim for individuality und pureness also affected their way of working. The Expressionist artists liked to work in natural surroundings, away from the negative effects of industrialization. Furthermore, they started to mix their own individual colors and thinned their paint with petroleum, so that they were able to create smoother strokes and had more freedom in their working method.
Schmidt-Rottluff’s painting of Dangas, a Northern-German spa town where he spent half of the year, is a typical example of these new insights. Natural colors have been neglected in favor of shrill, aggressive, contrasting color planes of blue, yellow and green. The rhythmically applied patches of paint lend a restless movement to the whole landscape. Rather than being an accurate description of a village scene, Schmidt-Rottluff represented his inner state.
The unrestrained style and psychological approach of Expressionist was not appreciated by all: in 1937, the Nazis declared their works Entartete Kunst (Degenerate Art) and a large number of their paintings and sculptures were destroyed.
(text: Maarten Levendig)
Geplaatst door Maarten Levendig op 3:48 AM No comments: 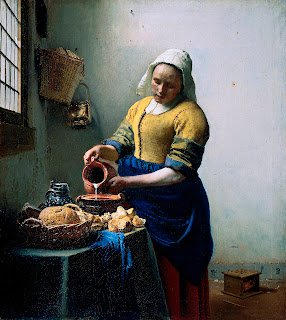 PHOTOGRAPHIC VERMEER
Johannes Vermeer’s Milkmaid (c. 1658) is perfect in its self-evident naturalness. The spectator will have no doubts as to what he sees: an ordinary, somewhat sturdy kitchen maid who pours milk from a jug into a bowl with quiet concentration. Yet we can be sure that Vermeer would have needed all his skills, knowledge and genius to create such an uncomplicated-looking picture.
Let us take a look, for instance, at his masterly depiction of the milk, which really seems to flow from the jug. Many artists have tried to defy the evident limitation of painting that it can show no movement, but few were as convincing as Vermeer.
Furthermore, the artist paid great attention to details. Vermeer gives thought to a nail set high in the white wall, as well as the tiny rough patches in the texture of the white plasterwork. Also note how the strong outdoor light enters through a crack in the windowpane. This interest in detail may explain why - despite the fact that art was his only source of income - Vermeer finished a mere 45 works during his life.
It is generally assumed - but not undisputed - that Vermeer made use of technical aids to study and create certain optical effects. Research has revealed a tiny hole in the vanishing point of thirteen of Vermeer's interior paintings, including this one. By inserting a pin with a string attached to it, he could reach any area of his canvas to correct perspective lines.
Also typical for Vermeer’s work are his carefully arranged compositions, which have a photograph-like quality. It is believed that Vermeer used a camera obscura, an optical device that projects an image of its surroundings onto a flat surface. This would have facilitated playing around with possible framings until he found one that pleased him.
If it is true that Vermeer worked with such tools, this would also provide a clue to his miraculous mastery of light reflections (such as the light spot on the maid’s forehead), as well as to the wonderful illusion of depth and immediacy in his paintings.
(text: Maarten Levendig)
Geplaatst door Maarten Levendig op 5:04 AM No comments: 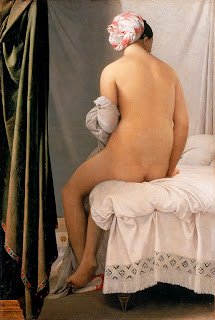 INGRES’S BATHER AND MAN RAY’S VIOLIN
Although the Neoclassical artist Jean-Auguste-Dominique Ingres (1780 – 1867) produced a variety of works, from portraits to history painting, he is nowadays most famous for his sensuous female nudes. This work from 1806, The Valpinçon Bather, is considered to be a precursor to many of Ingres’s later nudes, most notably his Turkish Bath from 1862.
More than a century later, the idealistic, serene depiction of this voluptuous yet chaste girl in an exotic context, inspired Man Ray to create his well-known photograph, Le violon d’Ingres (yama-bato.tumblr.com/image/26205144425). Typical for the surrealist movement that he belonged to, Man Ray’s 1924 recreation of Ingres’s work plays with the meaning of words and the associations and imagination of the spectator. He photographed his favorite model and muse, Kiki de Montparnasse, in a setting and pose that refers to Ingres’s enchanting painting. By adding the f-holes to her naked back, he transformed her body into a violin. This seems to explain its title, Ingres’s Violin, sufficiently, but we will see that that it is more than just the mix of a painting and an instrument.
Ingres’s great passion besides his art was playing the violin. As a violinist, he was not without merit and he maintained musical contacts with, among others, Paganini and Liszt. This pastime would eventually lead to a general expression in French: ‘violon d’Ingres’, meaning a skill other than that at which one excels, a hobby.
Man Ray’s photograph can thus be seen as a visualization of this French expression. And it can’t be a coincidence that Man Ray, though viewed as one of the most famous photographers ever, always persevered that he was a painter and sculptor and that his photography was just something he did on the side, in other words a ‘violon d’Ingres’.
(text: Maarten Levendig and Pauline Dorhout)
Geplaatst door Maarten Levendig op 5:04 AM No comments: