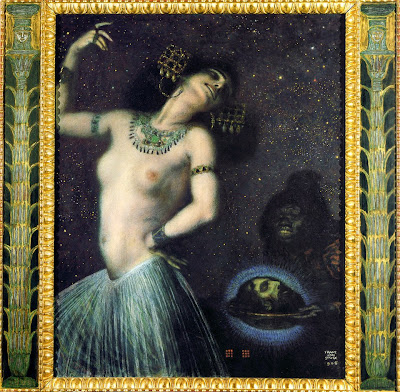 FATAL ATTRACTION
Opposites attract, so sensuality and disgust fight for precedence in this 1906 painting by Franz Ritter von Stuck. An exotic dancer fills the foreground almost completely. Dressed in just an airy skirt, castanets and jewellery, she tempts us with an erotic pose. In the shadows on her right a troll-like black servant looms up, adding horror and physical contrast. Grinning vulgarly, the creature presents a severed head on a platter. In life, it belonged to a bearded, longhaired man whose fate as a haloed martyr seems connected with the dancer’s triumphant attitude. Both the living and the dead share a glittering, star-studded night for a backdrop. While this may symbolize a saintly hereafter, it also warns against imminent danger: the girl’s glamour seems close but is out of reach, and there is only cold, deep darkness beyond.
The ambiguous scene is inspired by the Gospel story in Mark 6:21-29. When John the Baptist criticized King Herod for illegally marrying Herodias, the divorced wife of his half-brother, the prophet was imprisoned for his efforts. But Herodias was after more serious revenge and pressed her daughter Salome to charm her stepfather with a birthday dance, making him promise to give her anything she wished. Prompted by her bloodthirsty mother, Salome asked for John’s head on a platter. Herod had to comply.
The Salome image has been popular in art for centuries. Originally intended to create empathy with John’s religious righteousness, it gradually developed a life of its own and became an example of men falling victim to vicious women (before you blame this innocent writer, there were also virtuous tricksters like Judith and Esther!). Especially the artistic and philosophical milieu of the fin de siècle produced a large repertoire of fatally tempting women. Von Stuck was fascinated with this paradox and painted the Salome theme three times. She epitomized the inherent female ability believed to ‘innocently’ attract, then pervert the male’s soul.
Born a miller’s son, Franz Stuck became famous as an all-round ‘prince of art’ and was knighted to ‘Ritter von’ the year before painting this terrifying scene. His Munich villa, designed and decorated by himself, is now a museum.
(text: Jos Hanou)
Geplaatst door Maarten Levendig op 12:55 AM 1 comment: 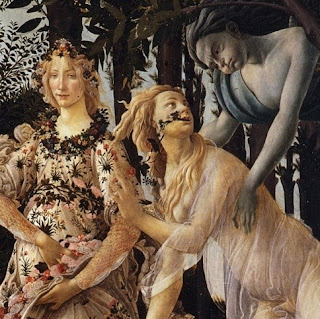 BOTTICELLI’S PRIMAVERA II: A COSMIC PUZZLE
Last week, we concluded that La Primavera probably had been intended as a wedding present for one of the young descendants of the illustrious Florentine Medici family. Sandro Botticelli created a monumental scene with mythological figures, representing such appropriate themes as love, passion and spring.
There are strong suspicions that, in addition to this more obvious symbolism, some other ‘messages’, of a much more complex content, were ‘hidden’ in the painting. This hidden content can be traced back to the intellectual circles around the Medici, including prominent artists like Leonardo, Michelangelo and Botticelli and poets and philosophers such as Poliziano, Pico della Mirandola and Marsilio Ficino.
Ficino (1433–1499) in particular was a key figure in the scientific and cultural developments in fifteenth-century Florence. Cosimo de’ Medici appointed Ficino as head of his newly erected philosophical school. In this function, one of his greatest merits was the translation of some important texts, including all the works of Plato and Plotinus.
Ficino’s outspoken, if not radical, points of view repeatedly clashed with the papal authorities. Within humanist Medici circles, however, he enjoyed great freedom and his ideas were appreciated and imitated. His philosophy combines (Neo) Platonism, astrology, Christianity and Hermetica (Egyptian-Greek mysticism). Ficino adapted Plato’s theory of sublime love and identified it with Caritas or Christian love, introducing the concept of ‘Platonic love’. He also believed that art, if created ‘perfectly’, could stimulate contemplation. This vision on beauty as a catalyst also allows a different interpretation of the painting.
La Primavera is probably a depiction of the ‘human faculties’ – the five senses plus the mind, an important aspect of Ficino’s hierarchical vision of love. The figures on the right represent the ‘lower’ senses - touch, smell and taste - and thus the corresponding earthly, physical love. In contrast, the Three Graces symbolize the 'higher' human faculties - hearing, sight and mind - and therefore the preferable love. Venus acts as a mediatrix between higher and lower love. Finally, Mercury’s upward gaze stresses his function as messenger of the gods, bringing people on earth into contact with the divine world above.
(text: Maarten Levendig)
Geplaatst door Maarten Levendig op 12:54 AM No comments: 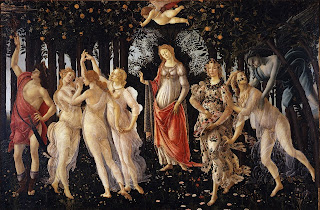 BOTTICELLI’S PRIMAVERA: SPRINGTIME FOR THE MEDICI
This astoundingly beautiful and intriguing painting was most likely made in commission in 1481, to serve as a wedding gift for Lorenzo di Pierfrancesco, a member of the Medici family, and Semiramide Apiani. The subject matter of the painting was, very appropriately, the Realm of Venus, goddess of love.
La Primavera (The Spring) is the oldest known example from the Renaissance era that shows full-length mythological figures. A work of such proportions with a classical content was quite rare during this period. The explanation for this unusual choice may be found in the humanistic background of the Medicis: not only were they immensely important in the political and economic arena of Florence, they also played a pivotal role in the revival of the classical antiquity as a source of inspiration for the cultural elite of that time.
The picture is best ‘read’ from right to left. Zephyrus enters the scene, imposing himself on the object of his desire, the nymph Chloris. Regretting his actions, Zephyrus then transforms Chloris to Flora, the goddess of flowers and spring. Botticelli shows the start of the transformation of Chloris by letting the first flowers spill from her mouth. In the next instant, the transformation is complete and Flora has strewn the garden with (almost two hundred different types of!) flowers.
The central figure is Venus, escorted by her usual companions, the Three Graces. Her blindfolded son Cupid is aiming his arrow at them. On the far left, Mercury wards off dark clouds with his caduceus, a staff with two serpents twined around it.
The iconography is based on classical texts, in particular Lucretius’ De Rerum Natura: ‘Spring-time and Venus come/ And Venus' boy, the winged harbinger, steps on before/ And hard on Zephyr's foot-prints Mother Flora/ Sprinkling the ways before them, filleth all/ With colours and with odours excellent.’
While all of these elements illustrate the fact that La Primavera was a very suitable gift for newlyweds, it is assumed that the painting also harbors details that were specifically included for the refined circles around the Medici family. To be continued…
(text: Maarten Levendig

H.N. Werkman: The Tale on the Market (1943); From The Hasidic Legends II; Groninger Museum 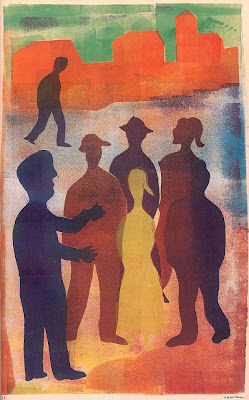 CONSOLATION IN DARK TIMES: WERKMAN’S HASIDIC LEGENDS
Hendrik Werkman (1882- 1945) was an avant-garde artist and printer, who ran a print shop in Groningen, a major city in the north of the Netherlands. He was a member of a society of Groningen artists, called De Ploeg (‘The Plough’), for which he produced many posters, catalogues, invitations and the like. De Ploeg had ties to other modernist groups in Europe, in particular the German Expressionists.
During World War II, Werkman, together with some friends, established a clandestine printing house which produced texts that were subversive to the Nazi regime. One of their most beautiful and daring projects was to make an illustrated edition in Dutch of Martin Buber's Tales of the Hasidim, a collection of Jewish folk tales. Buber, an Austrian philosopher, had published them in the early 1930s with the purpose of offering consolation, hope and religious inspiration to the Eastern European Jews in their miserable conditions. Though not Jewish himself, Werkman was very touched and intrigued by the spirituality and mysticism in the stories.
The series titled ‘Hasidic Legends’ consisted of fourteen tales, illustrated with colorful prints of Werkman’s hand. In spirit with Buber’s intentions, the series was meant to offer the Dutch people the prospect of better times. It was also a sign of solidarity with the Dutch Jews, of whom ultimately more than 75% would be killed during the war.
To produce the illustrations, Werkman made use of an experimental template technique which he had invented himself. Figures were cut out of wrapping paper, and then transferred onto the paper with an inking roller in various ways. Additionally, he used a myriad of graphic techniques. Because of the complexity of Werkman’s working method, each copy of his ‘druksels’ (as he called them) can be considered unique.
Unfortunately, Werkman paid the highest price for his underground activities. He was arrested by the secret police, and subsequently executed on 10 April 1945, three days before the liberation of Groningen by Allied Forces.
(text: Maarten Levendig)
Geplaatst door Maarten Levendig op 12:50 AM No comments: