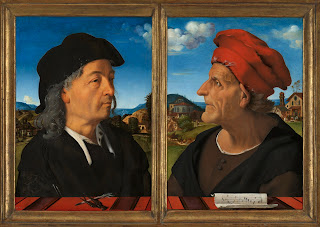 This diptych by the Florentine artist Piero di Cosimo (1462-1521) is one of the few real masterpieces of Italian Renaissance painting that the Rijksmuseum owns. The man depicted on the left is Giuliano de San Gallo (1433-1516), a well-known architect who designed important buildings for Lorenzo de’ Medici and the Pope. The tools in front of him, a pen and a pair of compasses, indicate the nature of his profession. His counterpart, Giuliano's father, Francesco Giamberti (1405-1480), is portrayed in on the right side. He was an architect as well, but also a musician, which is hinted at by the sheet music lying in front of him. Music and architecture were considered similar disciplines, since they both strive for perfect harmony. Giuliano commissioned the panels around 1482, not long after his father’s death, most likely as a memorial. In his time, Piero di Cosimo was a celebrated artist and probably the most successful painter in Florence after Botticelli. Except for his artistic qualities he was known for his highly eccentric behavior. He refused to do any cleaning and cherished a sincere hatred for such diverse things as the coughing of men, the sound of bells and the singing of the friars. He was suffering from various phobias, including a strong fear of fire. As a result, he hardly ate hot meals. His usual food consisted of hard-boiled eggs that he prepared fifty at a time. According to the famous artist biographer Giorgio Vasari, Piero lived ‘more bestial than human’. That this did not prevent him from creating beautiful, finely painted work is proven by these great panels.
Geplaatst door Maarten Levendig op 2:55 AM No comments: 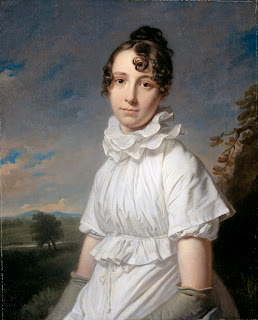 Charles Howard Hodges (1764-1837) was an Englishman who, after a short visit to Amsterdam in 1788, decided to settle down permanently in the Netherlands. He soon found his place within the Dutch art world and made his name as a portraitist of the rich and famous. Over the years, he painted over 700 portraits of artists, politicians, businessmen and other important people, including royalties like King Louis Bonaparte and King William I of the Netherlands.
Although Hodges would continue to work in the Netherlands all his life, his work always retained an unmistakably English character. This is also present in the lovely painting that Hodges made ​​of his daughter Emma Jane when she was 21 years old. Though she is dressed rather formally - she wears a gown and long-sleeved gloves in the Empire-style that was en vogue in those days - the painting is less solemn than most of Hodges’ work.
Emma Jane, who had a very good relationship with her father, apparently appreciated the painting herself. After her father’s death, she auctioned off most paintings from his legacy, but kept this portrait for herself. Shortly before her own death in 1868, she donated it to the Rijksmuseum, where it will hopefully be on show again in the future.
Geplaatst door Maarten Levendig op 10:31 AM No comments: