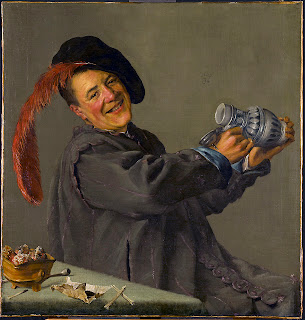 This merry drinker is one of the finest works of the Haarlem painter Judith Leyster (1609-1660). She was a very talented artist and probably a pupil of her famous fellow townsman Frans Hals. The influence of Hals is clearly visible in her choice of subject, but even more recognizable in the rough, vivid brushwork.
Leyster was not only one of the few female painters we know from the Golden Age; she was also officially registered, since 1633, as a master painter. That made her the first woman with that title, not just in the Netherlands, but even - as far as I know - worldwide. Being awarded the title of master by the guild was not only an honor, but also a professional qualification that gave certain rights, such as being allowed to train pupils and to own and manage your own studio.
Leyster was not so modern, though, that she pursued her career at all costs. After her marriage in 1636 with fellow artist Jan Miense Molenaer, with whom she had five children, she produced hardly any work. But during the preparations, several years ago, for a Judith Leyster retrospective at the Frans Hals Museum in Haarlem, one surprising exception surfaced: a lovely floral still life from 1654, hidden in the collection of a private collector. 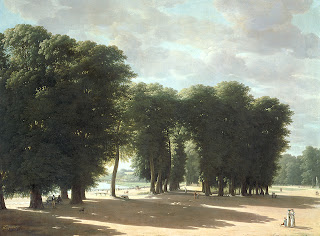 This atmospheric painting was made in 1809 in Paris by the then promising artist Pieter Rudolph Kleyn. This Dutchman lived in Paris, after winning of the prestigious Prix de Rome, an incentive for budding artistic talent. The Prix de Rome was a - initially French - grant-in-aid that enabled young artists to spend a few years in Paris and Rome, where they could learn the great arts and architecture from the past. During the French occupation of the Netherlands, Louis Napoleon, appointed King of Holland by his famous brother Emperor Napoleon I, decided to introduce the prize here as well. It still exists today.
Kleyn (1785–1816) was one of the first to win the Prix de Rome. In Paris he received an education from the well-known neoclassicist David and the landscape painter Bidauld. This painting is one of the works of art that Kleyn sent to his homeland to show the progress that he had made. The canvas describes the entrance of Saint-Cloud, a popular park near Paris. It is a sunny day and the park is filled with people enjoying themselves. Visitors are walking on the broad boulevards, children play in a fenced playground and on the left we spot an artist with his easel, perhaps a self-portrait.
After having resided in Rome as well, Kleyn went back to the Netherlands. There he took part in the Battle of Quatre Bras (1815), ironically, to defend his fatherland against Napoleon, who was trying to seize power again after his exile on Elba. In this battle, which took place shortly before the infamous Battle of Waterloo, Kleyn got badly injured. He died a few months later due to his sustained wounds, at only 30 years of age.
Geplaatst door Maarten Levendig op 9:14 AM No comments: 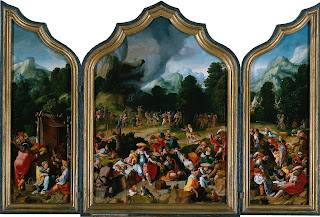 This colorful triptych is one of the most impressive late medieval works in the collection of the Rijksmuseum. Currently it is on loan as part of an exhibition about the painter and graphic artist Lucas van Leyden, in the Lakenhal Museum in his birthplace Leiden. The work describes the biblical story of how the people of Israel worship the golden calf against God’s will. Upon his return from Mount Sinai, Moses, in all his fury, smashes the Ten Commandments he’s just received.
Lucas (ca. 1494-1533) is regarded as an important representative of the North European Renaissance. His prints in particular were praised for their exceptional quality by contemporary authorities such as Giorgio Vasari and Albrecht Dürer. The latter, probably the most influential Northern-European artist of his days, met Lucas van Leyden in 1521, on which occasion he drew Lucas’ portrait. They also exchanged some of their prints. Rembrandt was very fond of Lucas’ work as well; Van Leyden’s descriptions of everyday life inspired him. He possessed the entire graphic oeuvre of his fellow-townsman, paying more than 200 guilders (an annual wage for a laborer) for some of them.
This painting shows another side of Lucas’ talent. The well thought-out spatial arrangement of this triptych reveals his great interest in and knowledge of the ‘modern art’ from Italy, Renaissance. Renaissance art found its ideological base in the philosophy of humanism, one of whose aims it was to show the human being in all his facets. Those influences are recognizable in the countless ways in which he presents the persons on the panels to us.

This engraving from 1602 shows us the land yacht used in by prince Maurits of Orange to impress and entertain his friends. They’d sail on the beaches of the North Sea shore near The Hague with a, for this period, dazzling speed of 50 kilometers (31 miles) per hour. The guests on this particular trip were reportedly 26 diplomats.
This very early eco-friendly limousine was invented by the famous mathematician Simon Stevin. Maurits and Stevin met in Leiden, where they both attended university. Stevin was a fascinating scholar who had an enormous impact on the development of military fortifications with bastions, the introduction of the metric system and the practice of inventing and using Dutch words in science, instead of the then common Latin terms. Ironically, some of his academic publications were in turn translated into Latin.
When Maurits’ father William of Orange was murdered and Maurits became stadtholder, he appointed Stevin as his advisor on military issues. Maurits became one of the leading generals of his time.