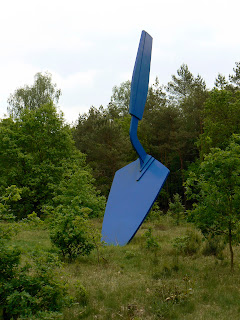 TROWEL I
For modern artists, it has become kind of fashionable to declare that their art is 'investigating' something. Very often, the object of such an artistic 'research' concerns the viewer’s perception of visual reality, i.e. the 'added value' that a spectator attributes to the presented image.
One of the methods used is to present familiar objects in a completely different context, thus providing them with a new identity. The godfather of this technique is the French artist Marcel Duchamp (1878-1968), who ‘transformed’ utensils like a bicycle wheel, wine bottle drying rack or urinal, only by presenting them, almost unchanged, in a museum context. Thus, the change was in the eye of the beholder.
From the mid-fifties onwards, the artists of the pop art movement took this principle a step further. They also isolated everyday objects from their original context, but their goals were different. While Duchamp, with his ‘found objects’, wanted to raise the question of what is or is not ‘art’, pop artists, by use of exaggeration, multiplication and other transformations, wanted to draw attention to both formal and hilarious aspects of the media world and modern mass consumption.
One of them was the American-Swedish sculptor Claes Oldenburg (1929), who became particularly famous for his radically enlarged utensils. By increasing the scale of objects like screws, clothespins, lipsticks or ice bags, blowing them up to a colossal size, he seriously confused the public.
This work from 1976, Trowel I, demonstrates the idea: the tool, loosely inserted into the ground, is a common image for nearly everyone, until you realize that this trowel is twelve meters high! The sculpture seems familiar and alien at the same moment, which can have an unsettling effect on the spectator.
Oldenburg created Trowel I, together with his partner Coosje van Bruggen, for an important exhibition of outdoor sculpture in the Netherlands called Sonsbeek. Oldenburg himself declared that he thought the giant trowel, plunged into the earth, was a ‘perfect example of a sculpture with no need for a base.’
(text: Maarten Levendig) 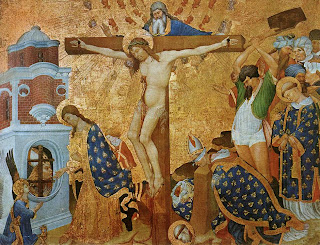 On December 21st, we introduced the Holy Helpers – a co-operative of
Saints to be invoked together against miscellaneous problems. One of
the team’s male specialists is St. Denis or Dionysius, patron saint of
France and bishop of Paris when decapitated during a Roman persecution
of Christians in 285 AD. Unimpressed by the loss of his head, St.
Denis picked it up and walked 10 kilometres along the Seine bank,
preaching a sermon all the way from Montmartre, his execution place,
to a spot suitable for his burial, the site of the Gothic abbey church
named after him and funeral church of the French kings. (Incidentally,
Saints in the habit of walking about this way are called
cephalophores).
The picture shows an altarpiece in the ‘International Gothic’ style,
commissioned in 1398 for a Holy Trinity programme in the Carthusian
monastery church of Champmol, near Dijon. The artist is Jean Malouel
(Johan Maelwael) of Nijmegen, a North Netherlandish painter working
for the French and Burgundian courts and uncle of the famous Limburg
brothers. Deeply immersed in late medieval aesthetics, Malouel’s altar
excels in profound piety. The vivid blue of the mantles of Christ and
the martyrs dominates his extensive palette, literally enriched by a
gold background. The powerful composition follows part of St. Denis’
legend. Still imprisoned on the left, he receives the last Communion
from Christ himself, assisted by angels. In the centre, a crucified
Christ watched over by God the Father and the Holy Spirit bridges to
the scene on the right, where a burly executioner lifts his axe anew
to definitely sever the blindfolded bishop’s head from his neck. A
companion already lost his tonsured head, while another waits his
turn. Turbaned spectators comment upon the event.
Obviously St. Denis’ Holy Helper expertise was to cure people from
headaches. Here is a comforting thought for those who distrust saintly
mediation: a brisk outdoor walk may also do miracles to overcome a
splitting headache.
(text: Jos Hanou)
Geplaatst door Maarten Levendig op 5:45 AM No comments: 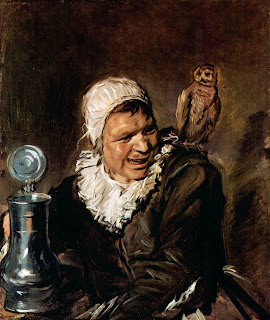 The meaning of this wonderfully lively painting, Malle Babbe (‘Loony Babbe’) by the Haarlem artist Frans Hals, has always remained somewhat obscure. It depicts an elderly woman in an elated mood, holding a large tankard, probably filled with beer. An owl is perched on her shoulder.
The work, painted between 1633 and 1635, is usually classified in the genre of the 'tronie' (‘face’), a type of Netherlandish painting that was not intended to show an identifiable person, but rather a certain mood or characteristic. Often, the facial expressions and costumes in such paintings are recognizable as deliberately exaggerated and theatrical. In Malle Babbe’s case, the owl, which traditionally serves as a symbol of wisdom, might also represent the darker side of life, since it’s a night bird. This explanation fits in with the nickname the painting got in the course of time: ‘The Witch of Haarlem’.
To make things more complicated, there was an actual ‘Malle Babbe’ who lived in Haarlem at the time Hals made this painting and it is quite possible that Hals knew the woman closely. She was an inmate of Het Dolhuys, a work house for (mentally) ill people in Haarlem, where, for some time, Hals’ son Pieter resided as well. Malle Babbe was a commonly known figure in the city and probably treated as a kind of ‘village idiot’. Therefore, we may conclude that in this painting, the owl could be hinting at her lunacy, representing the dark forces which have taken possession of her mind.
(text: Maarten Levendig)
Geplaatst door Maarten Levendig op 2:47 AM No comments: