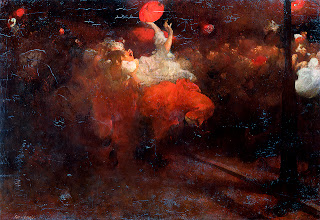 Today, April 30th, we celebrate Queen Beatrix’ birthday. On Queen’s Day, many Dutch people dress up in orange (after the surname of the Dutch royal family) and go out on the street to party and drink. Everywhere in the Netherlands you will find a variety of noisy festivities.
This colorful painting from circa 1890 proves that things were not so different in the nineteenth century. It describes an Orange Feast, but then on April 13, 1887, in honor of Beatrix’ great-grandfather William III. Jacobus van Looy witnessed the festivities in Amsterdam, and later incorporated his impressions and sketches into this picture.
Van Looy (1855-1930) was a Haarlem artist and author who was highly influenced by the French Naturalists. Naturalism pursued an immediate view of reality, unhindered by idealism or moral judgment. Sensory input played an essential role, rather than rational thought.
The powerful scene, painted on a rather large canvas, evokes a sense of being there and experiencing the sounds and smells of the wild celebration. It shows a turbulent crowd that runs and dances through the streets of the Dutch capital. Their expressive faces, bizarre costumes and their frenzy, doubtlessly stimulated by excessive drinking, altogether create an alienating atmosphere.
Geplaatst door Maarten Levendig op 2:32 AM No comments: 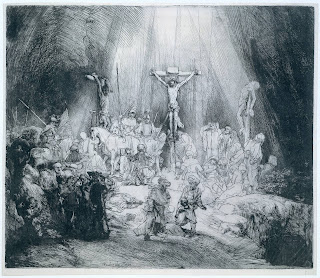 Rembrandt was not only a gifted painter, but also one of the greatest graphic artists ever. His touching depiction of the Crucifixion, called The Three Crosses (1653), is a convincing example of this. It illustrates the dramatic moment that Christ actually dies, when 'there was darkness over the whole land'. An enormous beam of light comes from above, hence creating strong shadows and silhouettes all over the place. Just as the Bible tells us the - initially skeptical - Roman centurion kneels down, crying out: 'Truly, this man was the Son of God!’
Now it is much of a cliché to state that he was the ‘master of light’, but here Rembrandt proves again that light is not just a tool for him to create a work of art – such as depth, perspective, lines or color - but that he uses it as an autonomous force. Just like God lets the heavenly light break through the dark sky to show everyone that there is still hope for redemption, so does Rembrandt let the light break through the dark accumulation of human suffering in his composition.
The Three Crosses is made with drypoint, a technique that has a different, denser effect than etching. Rembrandt worked regularly with it, but he had to cope with the general disadvantage of drypoint, which is that the plate wears down very fast, so that only a limited amount of prints is possible. This one is the third state (print version) of The Three Crosses and it is probable that he considered it the best, because he only started to sign the prints in this phase. Typically, Rembrandt continued with a fourth state, but then decided to blacken out large sections of the scene and to remove many details and figures, thus creating a totally different work of art. 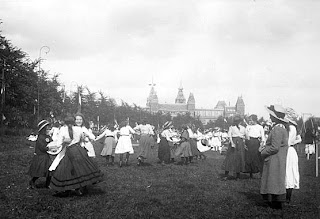 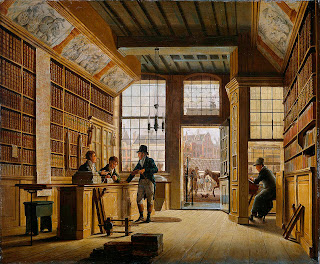 It goes without saying that one should be careful to automatically trust the factual representation of things and people in old art. In this case, though, we can assume that we get a pretty accurate impression of how a bookstore anno 1820 looked like. The artist, Johannes Jelgerhuis (1770-1836), painted the store of Amsterdam bookseller Pieter Meijer Warnars in commission and he really made effort to minutely depict its details. He truthfully portrayed Warnars and his customers, the numerous bookshelves, the friezes with allegorical scenes, and the exterior. It is known that Jelgerhuis much admired his seventeenth-century predecessor Pieter Saenredam and that he adopted his practice of making meticulous studies of everything he was about to paint.
We know that Meijer Warnars’ shop was situated on the Vijgendam, now Dam-square (known for the Royal Palace) and we see some houses of the nearby Warmoesstraat in the background. The painter knew the store very well: as it happens, Jelgerhuis was not only a painter, but also a celebrated actor and Warnars published a manual for actors that he had written. It is a tempting idea that he applied his knowledge of theatrical presentation to create this convincing impression of the shop.
Geplaatst door Maarten Levendig op 3:07 AM No comments:

Carel Fabritius: The Beheading of John the Baptist (c. 1640) 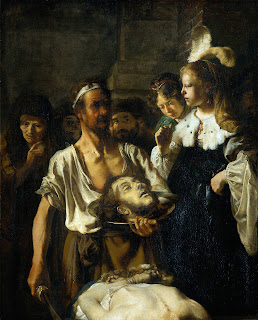 Fatal women have always been a popular subject: from Eve and Cleopatra to Mata Hari or, to name a more recent example, Ruby. One of the most depicted among them is undoubtedly Salome. Apparently, the biblical story about the attractive girl who demands the head of John the Baptist from her stepfather, in exchange for her seductive dance, captivated the minds of many writers and artists, as well as their audiences.
Salome’s wish – secretly suggested by her mother Herodias - was prompted by revenge, revenge for John’s moral judgment on the marriage of King Herod with Herodias, his sister-in-law. The vengeful character of Salome’s deed and the triumphal look in her eyes are captured brilliantly by the painter Carel Fabritius. Salome’s aggressive, decisive posture, but also her fancy dress with bird feathers, emphasize the girl’s dominance over the situation.
Carel Fabritius (1622-1654) was trained by Rembrandt, which is clearly visible in the typical brushwork, earth tones and golden highlights. Fabritius was one of Rembrandts most talented and inventive pupils. Sadly, his life ended much too soon: he died due to a massive explosion of gunpowder in his place of residence Delft. In this disaster, his studio also got severely damaged and most of his work was destroyed by fire. Only a handful of Fabritius’ delicate paintings are still with us, among which this macabre Salome.
Geplaatst door Maarten Levendig op 3:45 AM No comments: 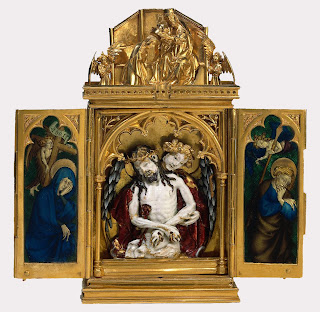 This is not a standard altarpiece. First, it is exceptionally small: even when its side panels are opened (they would normally be closed), this triptych is not more than 12.5 centimeters wide; in closed state, the dimensions resemble those of a big box of matches. Second, this portable shrine is extremely costly. It’s executed in a very skilful, detailed manner, with rich materials such as gold and enamel. And it must have been even more valuable, as it was also a reliquary. Originally, a small opening on the back did contain a relic (such as a little piece of wood from the True Cross), that used to be at least as expensive as the artifact itself.
Mini-altars like this are typical for the so-called Private Devotion, a late-medieval piety movement that focused on the personal experience of faith. Its main goal was the individual identification with the passion of Christ. This rich piece proves that Private Devotion was not only popular among the people, but also in high places. It was manufactured around 1400 for the French court, possibly for the king himself.
The center panel depicts the ‘Man of Sorrows’, the portrayal of Jesus Christ’s extreme suffering as a human of flesh and blood, rather than as a supernatural being. This theme was very popular in late-medieval religious experience, because it provided an excellent opportunity to identify with Christ.
Geplaatst door Maarten Levendig op 3:34 AM No comments: