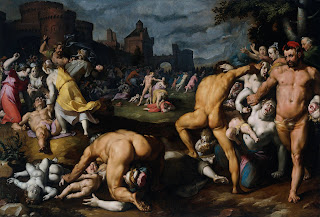 This immensely dramatic masterpiece was commissioned around 1590 by the States of Holland for Prince Maurits (1567–1625), son of the illustrious William the Silent, the official leader of the Dutch Revolt against Philip II, king of Spain. After a traitor shot down William in 1584, Maurits took over this responsible task from his father.
At first sight, the painting depicts the biblical story of the Massacre of the Innocents, the infanticide in Bethlehem ordered by Herod, the King of Judea, whose intention it was to kill the newborn King of the Jews, Jesus Christ.
But the artist, Cornelis Cornelisz. van Haarlem (1562-1638), used the scene to convey a propagandistic message: it symbolizes the tyranny of Philips II, opposed by Maurits as commander-in-chief of the army, and the suffering of the Dutch people due to the barbaric behaviour of the Spanish soldiers. He shows us uncensored the aggressive approach of the perpetrators, but also the cruel revenge of the women on the left, who pull out the eyes of a soldier. Probably most horrific are the dead babies, whose pale skin colour comes across horribly real.
Cornelis made a second version of this painting, for Maurits’ Haarlem residence, now on show in the Frans Hals Museum in that city. The two resemble each other closely, but the later version is somewhat more subtle, suggesting that even Cornelis’ contemporaries might have felt that the painting was a little too gruesome.
Geplaatst door Maarten Levendig op 4:19 AM No comments: 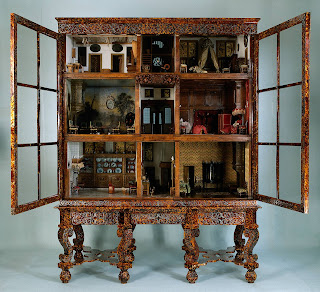 According to legend, this dollhouse from around 1690 was so expensive, that Tsar Peter the Great, who had wanted to buy it, could not afford it. While this may be an exaggeration, the owner, Petronella Oortman (1656-1716), a rich Amsterdam merchant’s wife, certainly spent a small fortune on it. With this amount, 30,000 guilders, she could have bought a second mansion.
From chamber pots to embroidered napkins, the details of the dollhouse form a rich source of information about (the ideas on) fashionable as well as daily life items of the Dutch urban rich. The dollhouse was a valuable asset for which furniture, fabrics, paintings, silver and chinaware were commissioned from well-known artists and craftsmen.
The house was obviously not meant as a toy for small children; moreover, even viewing it was reserved for the most important visitors. Built as a status symbol for a female adult in the 17th century, today the dollhouse is a favorite item among young visitors of the Rijksmuseum.
Geplaatst door Maarten Levendig op 7:30 AM No comments: 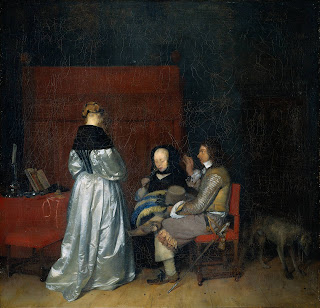 This magnificent work by Gerard ter Borch (1617-1681) was, until recently, titled ‘Paternal admonition’. The idea was that the daughter, the girl in the delicately painted satin dress we are looking at from behind, receives a moral comment from her father, the man in soldier costume who raises his hand to emphasize his point. His wife next to him looks introverted into her glass of wine.
In fact, there’s no real basis for that interpretation. The main problem with it is that the man is way too young to be her father. Therefore, the theory was replaced by another one: Ter Borch depicted a brothel scene in which the woman seen on the back is a prostitute, the other woman the procuress and the soldier a customer who’s holding up a coin to pay for her services. This proposal seems to be more likely, also because the whole atmosphere and décor of the scene (mirror, dog, prominently large bed) remind us of similar genre pieces with the same subject. Nevertheless, interpretation problems remain, not in the last place because the soldier’s coin is not (clearly) visible.
Even in his own days, Gerard ter Borch was already known for the ambiguous meaning of his paintings and he’d probably been amused to see 21st century art historians still quarreling about their meaning.
Geplaatst door Maarten Levendig op 7:35 AM No comments:

Willem Maris: Landscape with cows (end of the 19th century) 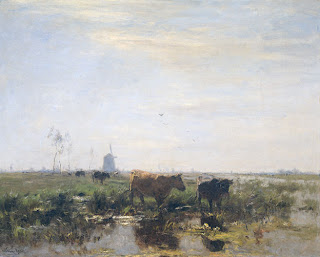 Willem Maris (1844-1910) didn’t paint cows, but light. These poetic words were his own and his work proves it. The beauty of nature, the laid-back atmosphere of a summer’s day, and the essence of the Dutch landscape; this painting has got it all. The superb choice of colors and the fine balance between areas with little or nothing going on and those with lots of details make the scene almost tangible, in spite of the rather rough brushstrokes. Vincent van Gogh was impressed, too: “A painting by Mauve, Maris, or Israels, expresses more, and more clearly, than does nature itself.”
Geplaatst door Maarten Levendig op 7:37 AM No comments: 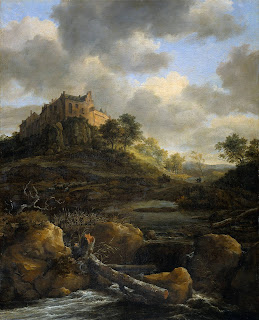 Many painters of the so-called Romantic Movement (Caspar David Friedrich, William Turner) were inspired by the 17th-century artist Jacob van Ruisdael. The Haarlem-born Ruisdael, who lived between 1628 and 1682, was particularly famous for his expressive landscapes.
The admiration that the Romantics felt is understandable because in Ruisdael’s works Nature is not presented in a decorative way, but as an autonomous force. The ‘personality’ of the landscape is expressed in the spectacular sky and the meticulously depicted natural forms. The Romantic artists, who were also gripped by similar themes, considered him as a pioneer in this field.
In this view on Bentheim Castle from 1654, now in the Rijksmuseum collection, you can see how much effort Ruisdael took to depict the various natural materials. He deliberately put as many contrasting elements as possible into the painting; water, rocks, trees and other vegetation all get their own treatment by Ruisdael. Even more striking is the dark, dramatic tonality of the picture, the threatening clouds above the rough landscape, in which man plays only a humble role (when you look closely, you will notice some people in the background). Much later, in the Romantic age, this dramatic effect, based on the idea of the dominancy of Nature, would be described as ‘picturesque’.
Geplaatst door Maarten Levendig op 7:48 AM No comments: