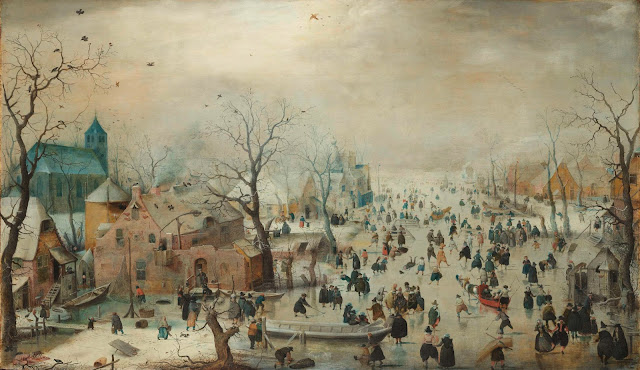 AVERCAMP ON ICE
One of the all-time favorite paintings at the Rijksmuseum Amsterdam is this winter landscape by Hendrick Avercamp. Small children in particular can spend ages staring breathlessly at the countless people depicted on and near the frozen river. Most of the figures enjoy themselves with ice-skating, sleighing and playing kolf (a sport similar to hockey), while others are busy selling merchandise or performing daily chores such as chopping wood and washing clothes. Avercamp didn’t forget to add some naughty details, such as the love couple in the hay stack on the left and other persons who are defecating, urinating or just show their buttocks.
Avercamp (1585-1634) lived and worked in the relatively small town Kampen, in the Dutch province of Overijssel. Here, far removed from known centers of artistic production such as Haarlem and Leiden, he became one of the first landscape painters of the Dutch School. Avercamp (nicknamed ‘The Mute of Kampen’ for his inability to speak) specialized in paintings depicting ice-skating people, not a very odd choice given the abundance of water in the Netherlands and the harsh winters of that period.
This painting from 1608 is typical for his work: its high horizon and bird's-eye view offer the artist the opportunity to show as many aspects of winter life as possible. But, due to Avercamp’s refined use of color and atmospheric perspective (colours and shapes that fade into the distance), the spectator experiences depth instead of just an accumulation of elements.
Besides such carefully conceived artistic concepts, Avercamp’s winter landscapes also provide an insight into historical reality, namely that in the Low Countries, skating fun brought together a wide range of people (and in a sense still does). All different strata of society, young and old, poor and rich, were enjoying themselves on the slippery ice. Avercamp shows them all, with their respective practices, specific accessories and apparel, thus presenting a wonderful visual overview of 17th-century society.
(text: Maarten Levendig)

Paul Signac: Opus 217. Against the Enamel of a Background Rhythmic with Beats and Angles, Tones, and Colours, Portrait of M. Félix Fénéon in 1890 (1890); Museum of Modern Art, New York 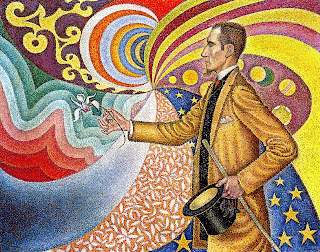 DOTTING THE EYES
We see a man’s portrait against a decorative background. An eccentric-looking gentleman in left profile, holding top hat and cane, keeps a sharp eye on a white flower apparently presented to an off-canvas recipient. The psychedelic-looking backdrop is a kaleidoscopic pinwheel of coloured patterns, swirling to the right.
However, there is more than meets the eye in Paul Signac’s painting, playfully entitled Opus 217. Against the Enamel of a Background Rhythmic with Beats and Angles, Tones, and Colours, Portrait of M. Félix Fénéon in 1890.
By 1886, the heyday of French Impressionism was over. Modern painters like Seurat and Signac searched for discipline and abandoned the intuitive, spontaneous impressionist brushstrokes for the scientific approach of Divisionism. Making colour an accessory to form, they experimented with new techniques based on optical laws. Their canvasses are filled with painstakingly juxtaposed dots of pure colour, believed to produce more luminosity when reunited in the viewer’s eye than premixed on the palette. The portrayed publicist, anarchist and art critic Félix Fénéon was a rare but fervent supporter of the Divisionists’ unusual theory. He introduced the term Neo-Impressionism for their organized, ‘pointillist’ treatment of colour and light.
Scientist Charles Henry was another Neo-Impressionist champion. His publications (illustrated by a colour wheel done by Signac) on optical theories included the psychology of visual perception. Henry proposed a mathematically calculable correspondence between outer stimuli and psychic reaction. Art, he said, is a medium affecting the relationship between sense and psyche; audibly by music, visually by colours and lines. And music and painting share the principle of continual ‘autogenesis’: reproductive, creative energy.
The background (and title) of Opus 217 translate Signac’s understanding of Henry’s ideas into a visual music of pure, non-representational dynamics. Expanding kinetic energies, divided into eight separate parts of colour and design, flow inexhaustibly from a centre point. At the same time, the static representation of the Neo-impressionists’ literary champion Fénéon holds a symbolist key to this reconciliation of figurative and almost abstract painting. The white flower in his writing-hand is a cyclamen, a reference to the rhythmic cycle of decorative energy behind him.
(text: Jos Hanou)
Geplaatst door Maarten Levendig op 2:18 AM 5 comments: 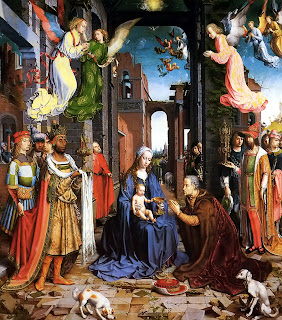 RISING FROM THE RUINS
Today, Epiphany is celebrated, the feast day commemorating the visit of the Magi to Bethlehem. This holiday has been very popular since the first stages of Christianity. The religious can identify themselves with the Magi, admiring and honoring the newborn child Jesus. In art, the depiction of the nativity scene in sculpture or painting provides the believer with the suggestion of a direct, almost physical contact with the son of God.
It was therefore all the more regrettable that the description of this episode in the Bible is rather sparse. Gradually, the need arose to expand the biblical history of the Epiphany with more story lines and details. The added story elements were partly derived from the Apocryphal Gospels (Christian texts which aren’t part of the accepted canon of Scripture), others were derived from prophecies and events from the Old Testament which were assumed to be a pre-figuration of those in the New Testament. The ox and the donkey entered the birth house and the Magi (wise men) developed into kings, with a specific appearance and carrying certain gifts.
Especially in the later Middle Ages, books elaborating on the birth and life of Jesus, like The Golden Legend of the thirteenth-century writer Jacobus de Voragine, were outright bestsellers. Although the Church was initially skeptical about these expansions of the biblical story, she also saw the positive influence on the piety of the faithful. For artists, the stories were a desirable source of inspiration.
This beautiful Epiphany from ca. 1510 by Jan Gossaert is typical of the late medieval perception of the story. For example, the ruinous setting is derived from medieval sourcebooks. They describe how Mary gave birth on the remnants of the dilapidated palace of King David, Jesus’ ancestor. It is an interpretation of a prophecy by Amos in the Old Testament: ‘In that day I will restore the fallen house of David. I will repair its damaged walls. From the ruins I will rebuild it and restore its former glory.’ The metaphor is clear: the Old Order is destroyed, and now a new era can begin.
(text: Maarten Levendig)
Geplaatst door Maarten Levendig op 2:28 AM No comments: