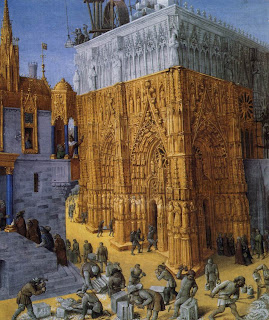 BUILDING FOR ETERNITY
Medieval construction business is in full swing in the foreground. Anonymous craftsmen, grey with stone dust, are hammering and chiseling away on masonry segments. A kneeling sculptor is carefully carving a statue, while others are preparing mortar to join decorative and structural parts. On the left, citizens carrying financial contributions climb the stairs of a palace. On its balcony a king, assisted by his architect, oversees the work with one hand pointing to heaven. In the middle ground, we see the purpose of these efforts. Churchgoers, both wealthy citizens and poorly clad pilgrims equipped with staff and rucksack, enter the portals of a Gothic cathedral richly ornamented with prophets, biblical kings and saints. But work goes on, for towers are still lacking. On the roof, a crane hoists up more building material.
French painter and illuminator Jean Fouquet created this miniature around 1465, closely following the cathedral architecture of his hometown Tours. But it is not what it seems. The scene illustrates a manuscript page of Jewish Antiquities, a history of the Jewish people. Written by Jewish first century historian Flavius Josephus, it remained widely read by both Christians and Jews since Roman times. Fouquet’s building site illustrates the story of King Solomon constructing the Temple of Jerusalem, but his contemporary architecture appropriates the ancient Temple in form and meaning. According to Christian theology, Ecclesia or the Catholic Church had displaced Synagoga or the Jewish Temple, and its construction was now considered a metaphor for building the Spiritual or Heavenly Temple of the New Testament. Like no other architectural style before or afterwards, Gothic cathedrals represent this notion of reaching for heaven. Emphasizing verticality, slenderness and light pouring in through stained glass windows, their sky-high design aims at Salvation and eternal life as a return on investment. The unfinished state of Fouquet’s structure expresses the ongoing character of this process, both metaphorically and in practice. The construction of Tours cathedral, for example, started in 1170 and continued at a leisurely pace until 1547.
(text: Jos Hanou)
Geplaatst door Maarten Levendig op 4:52 AM 1 comment: 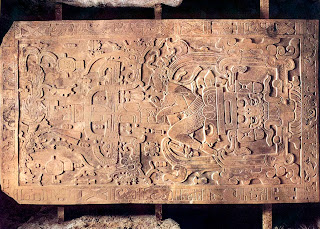 One of the most significant archaeological finds of the 20th century was the tomb of K'inich Janaab' Pakal, ruler of the Mayan city of Palenque from 615 to 683 AD. After having assumed the throne at age twelve, he ruled Palenque for an astonishing 68 years. During his reign, Palenque became a Mayan Florence, a medium-sized city crammed with unsurpassed architecture and art.
Pakal's tomb was found in the so-called Pyramid of Inscriptions. Until this find, it was not known that the Mayan's buried their rulers in a very similar fashion to the ancient Egyptians.
The concept and execution of Pakal's tomb are really remarkably similar to the Egyptian pyramids, which served as a sort of launching platform for deceased pharaohs, including worldly goods the Pharaoh would need and elaborate inscriptions as to how the Pharaohs' soul was to navigate through the underworld and reach the afterlife. Pakal's tomb was not only filled with relics and treasures, it also contained six servants.
The lid on the tomb describes how Pakal's soul is to manoeuvre through the underworld. It shows the ruler seated upon the Monster of the Sun, in its state of transition between life and death: a skeleton from the mouth down, yet with the eyes of a living being. The sun enters into this state of transition at dawn and at dusk. Here, the emblem of the Monster of the Sun contains the ‘cimi’, the sign of death, representing the ‘death of the sun’ or sunset, with the sun located on the horizon, sinking into Xibalba – the underworld.
The movement of the sun from east to west represents Pakal's journey from life into death. Inside the underworld at the centre of the universe, stands the sacred World Tree with a Celestial Bird—symbol of the kingdom of heaven.
Each night, the Mayans saw the Milky Way rise after the sun had set. For them, this starry river was the Underworld, and the dark space at its centre was the ‘Dragon's Mouth’ - its entrance. The ‘World Tree’ was basically the cross formed by the Milky Way rising perpendicular to the horizon.
(text: Edgar Foley)
Geplaatst door Maarten Levendig op 5:19 AM 1 comment: 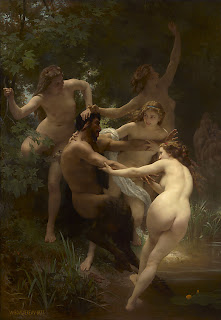 Today, many people see the paintings of William Bouguereau as being too smooth and even kitschy, but this wasn’t always the case. In his own time, Bouguereau (1825-1905) was considered one of the greatest painters in the world. He was praised extensively for his ability to depict mythological themes and other traditional subjects in a ‘fresh,’ modern way, and for his fabulous technical skills and complex compositions. Especially his piquant yet graceful rendering of the female nude was admired by both the public and in academic circles. His work, that would eventually comprise 826 paintings, was very popular with wealthy collectors, who loved to decorate their houses with Bouguereau’s idealizing pictures.
His success made him a very rich man, but there was also much criticism. New generation artists, who abstained from the formal, academic conventions, opposed Bouguereau’s traditional, inoffensive style. Edgar Degas and some of his fellow-artists even invented the word ‘Bouguereauté’ to describe slick and artificial works of art. Their harsh critiques have surely contributed to Bouguereau’s fall into disgrace.
Bouguereau’s painting Nymphs and Satyr was exhibited in Paris for the first time in 1873, one year before the daring exposition where the Impressionists showed their radical, controversial art. It is a typical Bouguereau in all aspects: it deals with a classical theme (actually a free interpretation of a text by the Latin poet Statius), it consists mainly of female nudes, who are depicted in the most complex body postures, and it is painted in his characteristic smooth, glossy style. Bouguereau was a perfectionist and he made numerous preparatory drawings; for example, for the body of the satyr he studied the rear of a real goat as well as the ears of a horse.
While the Impressionists’ aversion can be understood from their point of view and the period they lived in, the time may have come for a renewed appreciation for Bouguereau’s lighthearted, playful art as well as his astonishing craftsmanship.
(text: Maarten Levendig)
Geplaatst door Maarten Levendig op 4:20 AM 1 comment: