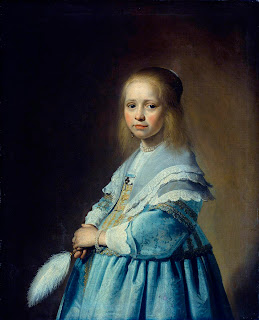 It is impossible not to love this girl immediately. That is because of her charming face and beautiful outfit, but of course, above all, the delicate way Johannes Verspronck painted her.
Verspronck (1597-1662) was a Haarlem painter who was clearly influenced, and probably also taught, by Frans Hals. But while Hals got famous for his rough strokes, Verspronck specialized in very fine and precise paintings, mostly portraits of wealthy burghers. Verspronck didn’t portray the child in an idealized way, but instead used all means to present her as convincingly as possible. He made efforts to show us the many details of her blue dress and the texture of the different materials; the gold lace, the jewelry and the ostrich feather. The lighting makes the girl’s sensitive features appear very lively to us. In her fashionable dress she looks older than she actually is: circa ten years old. Until the end of the eighteenth century children were assumed to be small adults and treated and clothed as such.
We have no idea of her name, but the Rijksmuseum Twenthe (an excellent art museum in the city of Enschede) owns two pendant paintings that are, very probably, portraits of the girl’s parents. These two works are considered highlights in Verspronck’s oeuvre as well, and I sometimes wonder who that family might have been that inspired the artist to create these wonderful pieces of art.
Geplaatst door Maarten Levendig op 2:21 AM No comments: 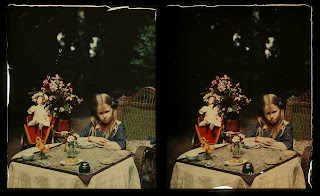 The first stereographic photographs were made within 10 years after the invention of photography itself and became an immediate success. In fact, they were the first mass-produced and mass-distributed photographic images. With the use of special viewers, every pair produced a 3D image, which gave the viewer an unprecedented feeling of being present in the scene.
Towards the end of the nineteenth century, people bought boxed sets of stereographs of exotic places and people from all over the world. The sets were sold as an “armchair virtual tour, traveling at a fraction of the cost”. One of the largest stereograph-producing companies, Underwood & Underwood, claimed stereographs gave poor children the opportunity to see the world, where before only the rich ones had been privileged to do so.
This photograph must have been taken in the early decades of the 20th century, after the invention of the autochrome process (see my May 16 post), adding extra vivacity to the 3D experience. With some practice, the image can be seen in 3D without special tools (by looking cross-eyed and bringing the separate images together). The viewers used by photographer Gaudin, his wife and some models in the second photo (1860) would have made it much easier, though.
Geplaatst door Maarten Levendig op 2:23 AM No comments: 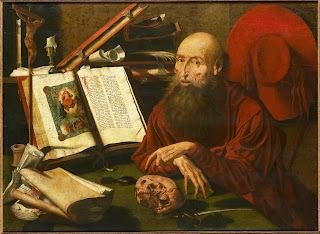 In my youth (I was born in 1971), there used to hang reproductions in Dutch trains, showing highlights from Dutch museums. My personal favorite was this strange painting: I could stare at the remarkable meager man with his strange hands for hours. All those objects in the man’s small room fascinated me as well: the old books, the candle, the giant red hat and, of course, the (somewhat frightening) skull. Brought up without any religious, let alone catholic, education, I had no idea who this person could be.
Many years later, when I studied art and literature, I learned that the painting depicted Saint Jerome in his study, and that these curious objects were just attributes that referred to his life and status. Jerome (ca. 347–420) was one of the four Church Fathers. He is especially famous for translating the Bible from Greek and Hebrew into Latin. His translation, known as the Vulgate, would become the official Latin version of the Holy Script in the Roman Catholic Church. It is for this enormous achievement and the innumerable other works he wrote, that Jerome is often shown while studying. The headdress on the wall behind him is a cardinal’s hat and refers to his authority in the Church. The so-called Vanitas symbols in this painting, like the crucifix, skull, blown out candle and the scene of the Last Judgment, all refer to the saint’s devout and ascetic life.
Geplaatst door Maarten Levendig op 2:26 AM No comments: 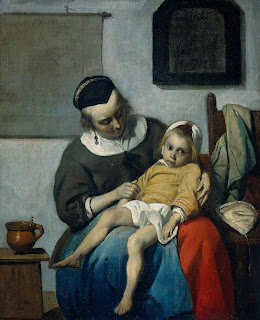 Dutch Golden Age painters are renowned for their scenes of every-day life, but this one by Gabriel Metsu is highly unusual. The theme of a woman taking care of a child was common, often representing the Christian virtue of Caritas. What is rare about this canvas, however, is the depiction of the pale and sick looking child, hanging almost lifeless on the woman’s lap.
The image is so convincing because Metsu portrayed the child so skillfully. He painted the unhealthy hue of its skin perfectly, which is emphasized by the strong colors in the rest of the painting. The composition and the woman’s obvious dedication draw all our attention to the boy or girl. Personally, I never skip this one when visiting the Rijks and the penetrating, hollow eyes of the sick child always haunt me for a while.
Gabriel Metsu (1629-1667) was a pupil of the famous, Leiden based, Gerrit Dou. From December 16 to March 20, the Rijksmuseum will dedicate an exhibition to Metsu’s work, about which I will inform you later.
Geplaatst door Maarten Levendig op 2:29 AM No comments: 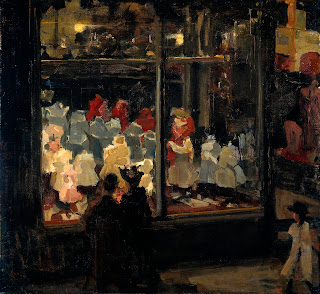 Due to French artists like Monet or Renoir, the usual association with impressionism is that of sunlit landscapes or Paris’ vie mondaine, painted in light and bright colours. But in Amsterdam, in the 1880’s, a group known as the Tachtigers (Eighty-ers) applied their own interpretation of the new movement and the works of artists such as George Hendrik Breitner, Isaac Israëls and Willem Witsen, looked quite different. The more sombre atmosphere and darker palette of the Tachtigers is partly explainable because of the less sunny climate in the Netherlands, but they also reveal a more pessimist attitude. What they had in common with their French colleagues, however, was a fascination for modern life and the wish to catch it in a spontaneous, non-academic style.
Isaac Israëls, son of the also famous Jozef Israëls, first worked in The Hague, but moved to the capital city in 1886. There Isaac started to paint impressions of Amsterdam street life, often lit by gaslight, a novelty just introduced in those days. Sometimes Israëls was so intrigued by a certain sight that he even rented a room on the opposite of the street to record it carefully.
This urban scene is painted from such an upper room, as well. In the corner we see a little girl, that seems to ‘walk into’ the painting, as if in a snapshot, reinforcing the impression of vivid reality. The gentleman and lady on the left contrast darkly against the brightly lit shop window. It is obvious that not the people are the protagonists in Isaac Israëls’ painting, but modern city life itself.
Geplaatst door Maarten Levendig op 2:30 AM No comments: