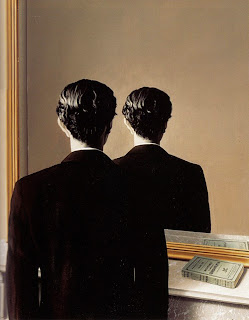 When I was a boy, I became very impressed with the work of 19th-century writer Edgar Allan Poe. Especially his fantastic tales stimulated my imagination and revealed a world to me that had (pleasantly) little in common with my everyday reality. Poe would become my favorite writer. During that same time, I began to visit museums. Strolling through Museum Boijmans van Beuningen in Rotterdam, I was bowled over by this painting by Belgian surrealist Magritte.
The image of the man standing in front of a mirror, who - surprisingly - sees nothing but his own backside, was one of the strangest things I had ever seen. This unnatural situation fascinated me and I wondered about the deeper meaning of the title: ‘Reproduction interdite’ (Not to be Reproduced). A detail that I, oddly enough, noticed only much later, was the book in front of the mirror: a French copy of ‘The Narrative of Arthur Gordon Pym’ by Poe. Being a fan, I naturally knew the book - the only complete novel that he ever wrote – but what was its significance in this painting?
This question turned out to be difficult. Fact is that Poe’s novel (first published in 1837, exactly 100 years before the painting) deals in various ways with perceptions of reality, reflexivity and self-reflexivity. The book is Arthur Gordon Pym's eyewitness account of his adventurous journey to the South Pole. Pym repeatedly emphasizes that he is the real author of the book and not that ‘Mr. Poe’, as some people seem to think. The latter is really only the editor of the work. Pym is particularly annoyed at this because he fears that his travelogue will be categorized ‘under the garb of fiction’. Likewise, Magritte plays with the conventions of what a painting should look like. We are looking at a portrait of his friend and patron Edward James, but we can’t see his face.
What Magritte's affinity with Poe was exactly, we will never know for sure, but his novel occupies a special status in this painting: it is the only object which is correctly reflected in the mirror.
(Text: Maarten Levendig)
Geplaatst door Maarten Levendig op 4:23 AM